In the game, you can play as Kick Ass, Hit Girl, or Big Daddy. Each charater has a light and heavy attack that can be strung together into small combos. Each character also has three special attacks assigned to the Square, Triangle, and Circle buttons requiring different amounts of MP. For bosses, each character has two finishing moves. 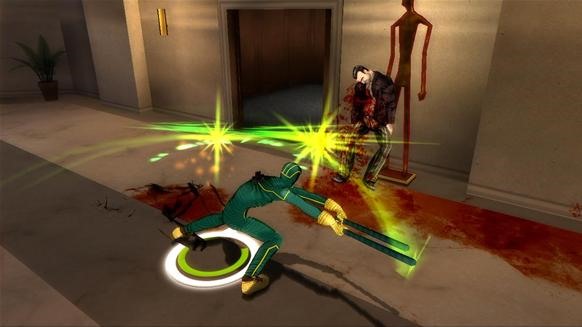 Fun to play, solid character. Light attacks focus more on a strait line of attack, but can be easily interrupted by the enemy. The best attack for Kick Ass is his heavy attack. Less prone to interruption, this attack has a front hit area of around 90 degrees, perfect for taking down groups of enemies. The finishing moves for Kick Ass are average, each time he knocks the boss unconscious.

Kick Ass has the best defensive specials of the game. His square attack is forgettable, but the other two can be used often in battle. The triangle special attack is a strong hit that knocks out everything in front of him, shown in the picture above. Very useful to make room in an area full of enemies. His circle special is health regeneration! In boss fights this is a lifesaver and turns the character into a sort of tank character. In the game, we would use Kick Ass to melee the bosses while Hit Girl shot safely from a distance. 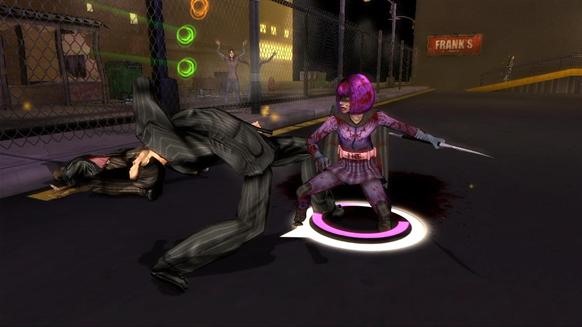 Hit girl uses a double sided spear for light attacks and double guns for her heavy attacks. The spear is flashiest weapon in the game. It's just a lot of fun swinging it around. It's fast and effective. The spear attack's range is virtually 360 degrees, getting all enemies regardless of where they are. It is susceptible to canceling, but it doesn't happen often enough where one would stop using it. Her gun attack is not as flashy, but it's a very effective long range weapon. With acceptable accuracy, you can focus on taking out enemies from a long distance or setting barrels on fire without having to get close. Hit girl's finishing moves for bosses include beheading or a point blank shot to the head.

Her special attacks are average. Square special is a frontal spin attack, good for catching a close group of enemies and knocking them back. Her triangle special is similar to a jump and attack combo, just with a larger area of effect. The Circle special is another dash attack, but with a shorter attack range.

Note: While I stuck to mostly using normal attacks with hit girl and place them above the special attacks for this character, my wife tended to use special attacks whenever possible when playing co-op. Her favorite was the triangle special, where Hit Girl would jump to the air and shoot down in a circular fashion to nearby enemies. 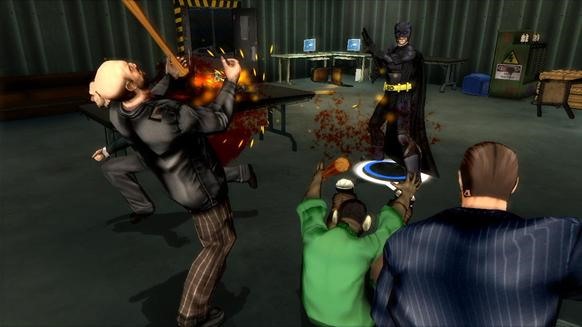 This character  was the least played of the three characters. He uses a knife for light attacks and his shotgun for heavy attacks. The knife has a small range so you can only use it on one or two enemies standing right in front of you. This isn't good when most situations have you crowded with enemies from all sides. His shotgun is strong, but it's spread over a wide area and has very low accuracy when the focus is only on one enemy.

Big Daddy has the best offensive attacks. The square special is a grenade blast that knocks out everything in front of him. Same for the triangle special, it's a quick succession of shotgun blasts that do the same thing. His circle special is comical. It's a smoke bomb that confuses nearby enemies around him for a few seconds. 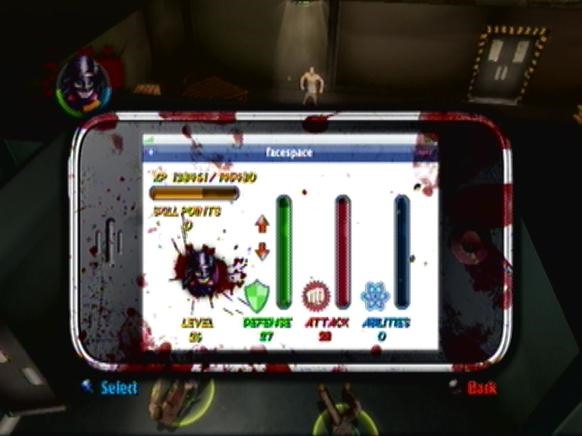 Experience for all characters gives you a bonus to your defense, attack, and special attacks. The more you kill the more xp you'll get. Each level you earn for your character will give you two to tree(this is rare) points to spend on these three characteristics. Our strategy was to put one point in defense and one in offense at each level gained. The really great thing about this xp system is that you can distribute the points at any time, so if you wanted to take away from defense and give it to attack, you could. No need to restart your character from level one! I don't know what the max level is. Our highest character is Hit Girl at level 32 and still gaining xp.

For all three characters, the only thing that was useless in their arsenal was dash. Dash serves no purpose. It has a very short range, does not chain into an attack, and there is a pause and the end of the dash, which makes you susceptible to an attack.

Once you beat the game you'll be at such a high level that to replay the game would be overkill. You'll kill everything in one hit. Thankfully there is extreme mode. This mode is unlocked after you beat the game. The enemies have a lot more hp, hit harder, and stronger enemies are introduced earlier. For example, the rocket launcher guys start appearing in level four instead of level seven. Arena mode is also unlocked after beating the game the first time. It's a mode where waves of enemies come at you one after another, to see how many rounds you can last. We haven't played much of this mode, but we've made it to wave four. 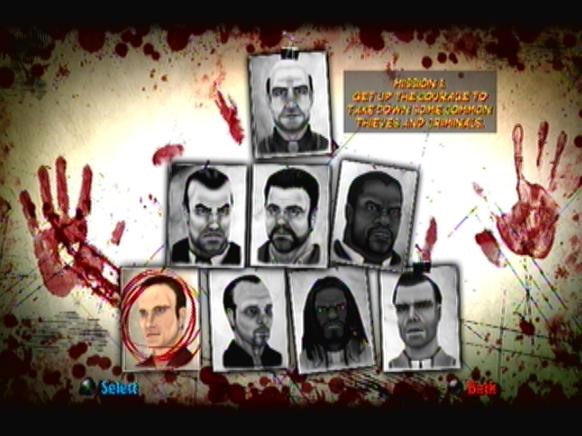 There are eight levels in the game but only four locations.

To keep things fresh when revisiting locations, some layouts where changed or the point of entry is different. For the lumber mill, the last time you go through it everything is on fire and that gives it a different feel. 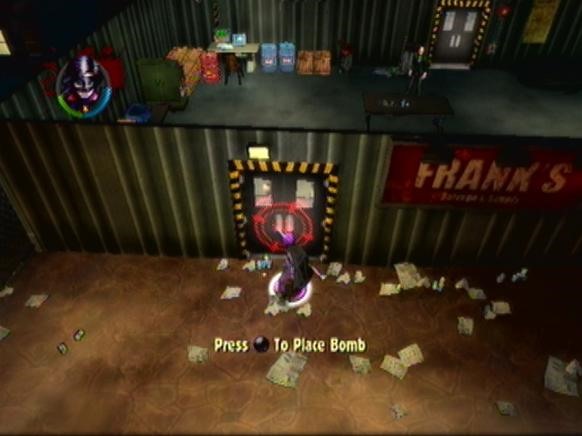 To keep things interesting with set number of character moves and locations, most levels introduces a new challenge. In level five they introduce surveillance cameras. If they see you a wave of enemies come. It's actually a great way to gain xp. Just keep getting caught and you can level up quickly. This level also has the explosive mini game where you have to place explosives in certain places in order to blow up the warehouse. Level four has rolling exploding barrels that you have to avoid as you move up. In the penthouse, enemies with rocket launchers are introduced and they are a pain to take out. There is also a shooting level in the penthouse that we were not expecting so we won't spoil it here. We were very surprised and loved moving side to side killing everything in sight. Our favorite challenge is the junkyard level where you had to fight while cars were falling on you.

The environment plays a fun part in the game. There is always something you can knock an enemy into to help in your fight. You can kick them into sharp object that will pierce through them and kill them instantly, regardless of health. Knock them into a power generator and they'll be electrified, or into a fire and they'll run around burning and forget all about you. In the warehouse, you can throw enemies into the huge cooking microwaves just like in the movie. Heaters in Frank's penthouse blow up. It's a fun diversion to see these things from time to time. 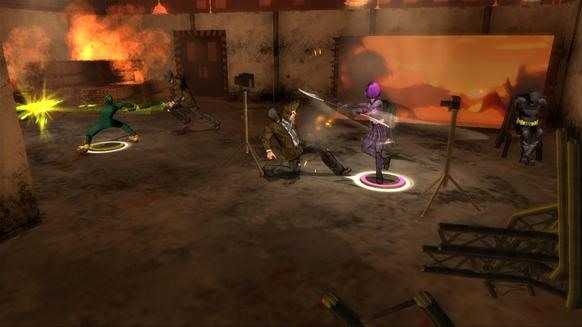 One thing that I want to specially mention is the camera view and the fighting areas. In some games, it feels like you can't move. Hallways are too narrow, walls get in the way of you view, or too many objects make it hard to move around. This game had none of that. We didn't have to move the camera much to get a good view of the situation and that made us focus more on fighting. There were no walls or obstacles that obscured our view. The hallways never felt tight or restrictive to our game play and all objects were on the side so that the main fighting area was always open. The items that were in the middle of your path could always be moved by simply walking into them or hitting them. We really liked this type of smooth design.

We played this game Co-op and had a blast. As a single player game, it can be quite hard. The enemies come at you from all directions and you will find yourself in the floor often. In co-op, a lot of that difficulty is taken away and it was just fun. We mostly did our own thing with regular enemies but we had set plans against bosses and long range enemies. The screen position in co-op was never a bother, we could always see what we needed and moving the camera manually was barely used. The game kept throwing new mechanics to keep things fresh and the addition of extreme and arena mode expands the life of the game in a way that you actually want to beat them.

Part 3:Conclusions of this review will be up on Monday. Please look forward to it.