By now you may have heard that the Diablo 3 Friends and Family beta testing has begun. Diablo III is the next highly anticipated addition in the Diablo trilogy, and is the sequel to Diablo 2, originally published all the way back in 2000. The game is the product of Blizzard Entertainment, a company well known for its very successful Warcraft and Starcraft franchises. Like the other Blizzard series, Diablo III will be exclusively for PCs at launch. Console players can rejoice as the lead project designer recently stated that Blizzard is "very, very serious"  about a console port.

Since the start of the Diablo 3 Friends and Family test, there has been a great deal of gameplay posted to sites like YouTube and gaming blogs. We're finally seeing real footage of regular players enjoying the game. Take a look at this video of a female monk character in action:

The Diablo III beta allows you to try out all five classes in the game, such as the monk featured in the video above, but limits you to the early stages of the game. If you're hoping to find out the full extent of what will happen in the Diablo world of Sanctuary, you will have to wait until the game is completely launched.

If you are not a friend or family member of a Blizzard employee, you might be feeling a bit down about your lack of access to the exclusive test. Don't worry though, there hasn't been an official release date announced for when the Diablo 3 public beta test will begin yet, but Blizzard officials have said it should be starting soon. Even more exciting--you can sign up to play in the Diablo 3 beta right now!

Follow these steps on opting-in so you can download, install, and play the Diablo 3 beta when it begins: 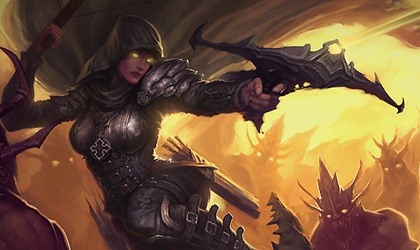 After running the System Tool, you'll have successfully opted-in to the Diablo 3 beta test! There's no guarantee that you'll be selected to test in it, but when Blizzard decides to start picking folks for it, you'll be one of their options, good luck! Hopefully soon you'll be running around Sanctuary as a Demon Hunter gunning down monsters and other evil creatures.

I would try to get in to beta but then when I get the full version I would be kind of bored early on.

I tried to sign on yesterday only to discover that my two battle.net accounts were hacked after a year of inactivity. One account was locked and on the other I'm now known as Zhang lol. I'll rummage through my documents today to see if I can't find the serial key to the games in order to recover them. Otherwise I'll just make a new account.

Unfortunately this didn't work when I tried, I got the following error:
Unable to Continue
You must have at least one full version of a Blizzard Entertainment game attached to this Battle.net account in order to set up your beta profile.
Back to Battle.net Account Management

Hmm, that's odd. The FAQ on the Diablo 3 site didn't indicate that you needed to have a Blizzard game attached to your Battle.net account first.

Hmm, has my last comment been filtered?
Bashiok, the Blizzard Community Manager has confirmed that you need to register at least one game to be eligible to the beta.

Oh ok,I guess we can't post comment with url inside.
So I can't give you the link to the Blissard forum thread related to that restriction :/

Looks like you're right. But looking at the officlal FAQ from blizzard on how to enter the diablo 3 beta, they left that particular item out: http://us.blizzard.com/en-us/company/events/diablo3-announcement/index.html#beta:d3-faq

"To sign up for the Diablo III beta test or future Blizzard Entertainment beta tests, you first need to create a Battle.net account. You can then opt-in to the beta test for Diablo III, as well as beta tests for future Blizzard Entertainment games, through the beta opt-in process. To get started, simply click Beta Profile Settings in Battle.net Account Management. Please note that opting in to a beta test through this method does not guarantee that you will be selected."

If you needed a game to be registered they should have said something, it's not that hard to mention. I don't mind them allowing only paid customers access, but at least be upfront about it.
What if you start WoW (it's free up to lvl 20), would that count as a registered game?

I bet it would! Good idea. I had forgotten that they were giving WoW accounts out for free. Didn't they do something similar with SC2 as well? That would probably work, too!