If you're unfamiliar with League of Legends, you're either not into PC gaming or you haven't spent much time on the internet. Riot Games officially released League almost two years ago, and since then it's become a huge hit. In fact, the Santa Monica based company recently announced that the DOTA inspired game has 15 million registered users, 4 million unique logins each month, and 500,000 people playing the game at any given moment. 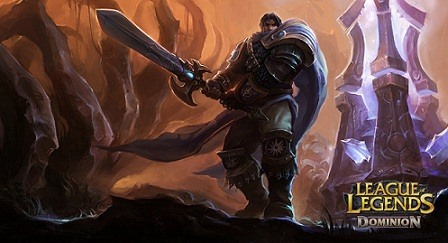 League of Legends isn't just about playing—it's also about watching. In fact, the Season One Championships held in Sweden attracted almost 1.7 million views from around the world as fans of the game tuned in to catch several professional teams duke it out for $100,000 in prizes (Season Two will feature a cool $5 mill up for grabs). It's safe to say that a huge factor in the game's success is the highly praised business model of giving away the game for free with all features unlockable simply by playing. Effectively, the only barrier to enjoying the game yourself is the ownership of a middle-of-the-line computer and the willingness to create an account. And soon Riot Games will be giving you even more gaming goodness for free.

While there have been frequent and small updates to the game since it first came out in 2009, none of them compare to the impending release of League of Legends: Dominion. The new game mode looks to turn the MOBA (Multiplayer Online Battle Arena) genre on its head. League of Legends, Defense of the Ancients, and Heroes of Newarth are all similar games that involve two teams of 5 players fighting across a single map with the intent of pushing into the opposing team's base and destroying it—an act which ends the 20-40 minute matches. Instead, Dominion splits the focus of both teams across five control points placed in strategic locations on the map. The faster paced format leads to constant and small skirmishes, rather than the larger but infrequent clashes that occur in the classic matches.

The ability to play League of Legends: Dominion won't be restricted amongst Riot's large fan base. On release, every existing and new player will have access to the new mode with every champion previously unlocked on that account. The ability to seamlessly move accomplishments and purchases between the existing offering and Dominion means that Riot has effectively created an eco-system, similar to software giants such as Microsoft and Google. Spending time or money in one area of the game provides value to the player in the other area as well. This strategy will likely shore up their defenses as the upcoming Valve title DOTA 2 looms on their competitive horizon.

Of course the biggest question is, "When will League of Legends: Dominion be released?" Unlike other companies that set release dates, sometimes over a year in advance, it doesn't look like Riot will be releasing any details on an exact date. It is thought that all the necessary assets have already been patched into the game and lay dormant, awaiting the eventual flick of an activation switch. Indeed, it appears that the popularity of League of Legends itself is the only thing preventing the game from coming online.

A recent announcement revealed that Dominion will be playable in a "limited beta" soon. Instead of being an exclusive club of beta testers however, this beta will be open to all but limited to off peak hours. This news is not surprising, as the game's large user base occasionally creates queues and server problems during peak hours. Again, there is no set date for the beta to begin, but given the capacity concerns, it's extremely likely that League of Legends: Dominion will turn on quietly and unannounced, possibly any day now.

Oh, and those lucky few who had the opportunity to fight over Dominion control points at the Gamescom and PAX conventions? Almost all of them used the words "really fun" in their reviews of the game afterwards.

Update: The morning after I wrote this article, Dominion became playable for two hours as part of the "limited beta" strategy. During that time I managed to get four games in, and it is incredibly fun! I look forward to more beta testing and an eventual complete release.

I took a sick day yesterday and while playing some LoL to recover, I noticed that Dominion was available around 10am-noon. Um, it was chaotic! I didn't do well so I deleted the fraps lol.

Ha, it is intense! I actually rolled out of bed when it turned on and captured some of my first games using XSplit. I detailed the experience on my League of Legends blog - State of the League.

If you log in to LoL, it says that dominion testing will now happen at 11:30am. I assume that means daily.

I think it's whenever to be honest.

It was on last night around 9ish. We actually won a game. My group usually only plays AI but I have to say real people make some pretty stupid moves. But I died like 10 times, so I wasn't the best decision maker either.