Back in the Super Nintendo days, playing one RPG after the other, memorizing maps and mazes became second nature if you didn't want to look at the mini map or get lost often. I would make it a point to memorize corners and the overall structure of the dungeon or location, so that graphically I would know where I am at all times. It's not like today, where major games come out with 200+ page guides detailing every last inch or going online where you can download a map or look at Youtubes for help. If you were lucky Nintendo Power would devote a few pages to map a portion of your game, and that was it in terms of reference materials.

This skill has become very handy in real life. Being able to drive to a location and remembering the ten or so turns back home strictly by visual references means rarely getting lost or having to look at a GPS to orient yourself. It works in layered parking lots too, but I think that's more of the fear of not finding your car than skill. Always knowing things like where north is to orient yourself is also something picked up from games, it is very helpful in finding new routes to location by trying local roads that lead to the destination.

But I got lost in Minecraft.

A month ago while everyone on the server was building and chatting, I set off on an expedition to look around. The most interesting piece of land near our starting point is in the western direction, with the east covered with water, the north unexplored,  and the south having some rather uninteresting terrain. I headed west for a few minutes until I hit water and then worked my way north through the coastline to see new things. Because the coast was circling back to our original spawn point, I thought I would eventually hit home, but I was wrong. I traveled for probably twenty minutes before giving up. When I tried to retract my steps I ended up in new places I had not seen before.

The hardest part of getting lost is accepting that you are. I barely have any good qualities in real life and this was one of them! Not to mention that I didn't want to lose all the goodies found during this doomed trip, my inventory was full. For me to get back home I would have to do one of two things, stay there and mine until I can create a compass (which would take days), or die and instantly teleport to my spawn point at home, but lose everything. And thus the shack of shame was built: 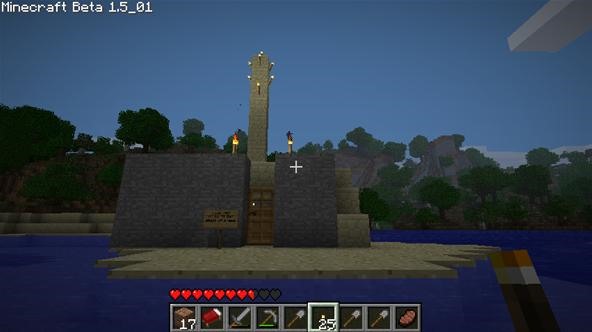 I built a small house by the coastline and put a light tower on top, so that if in the future someone was to pass by this place they would notice it. It was also built next to a mountain waterfall composed of lava, the first time I've ever seen such a thing. 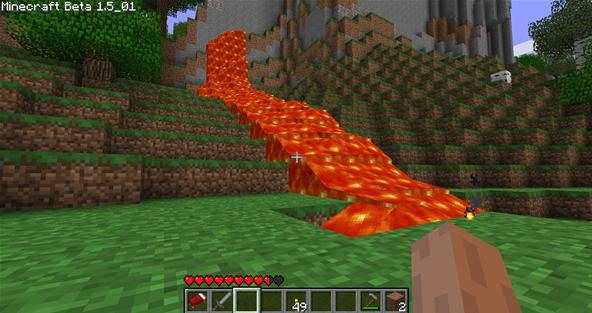 In this house I put everything that I found on that trip, in the hopes of one day finding it again: 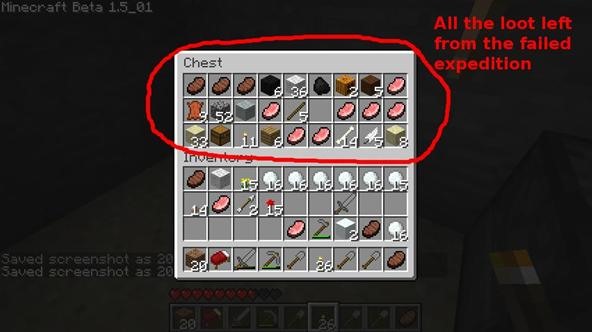 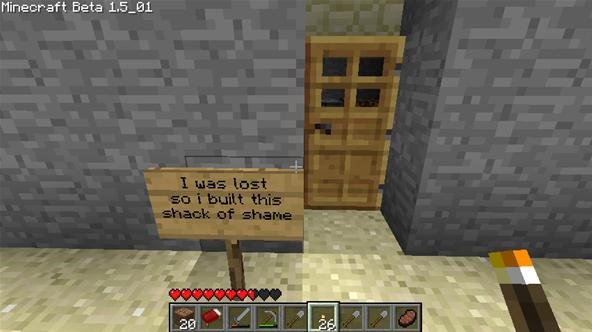 A few days ago I set off on another excursion, this time to the unexplored north. Wiser, I now leave beacons of light pointing to the direction of my home. If I ever get lost or need a bit of assistance, I just look for these lights.

After several minutes of following the northern coastline I notice a familiar mountain. Curious, I circled near it and 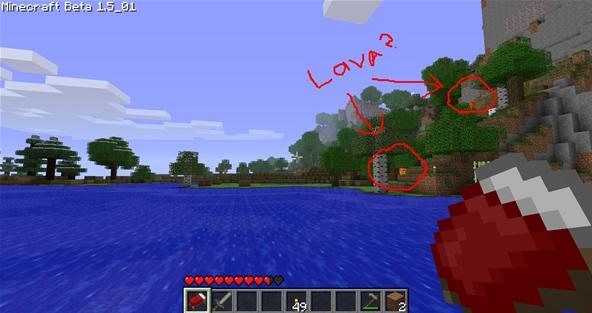 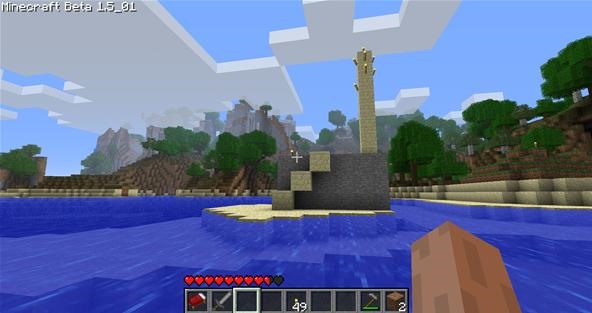 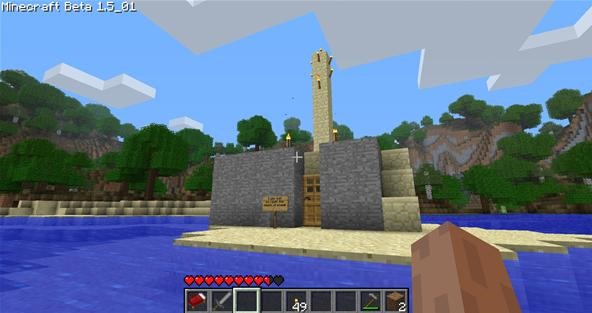 The lava waterfall! My shack of shame! It's all there! Oh glorious, glorious day!

The second I saw the lava spewing from the mountain Rocky Horror's song I'm Going Home started to play in my mind.

On the day I went away

Was all I had to say

I want to come again and stay

Smile, and that will mean I may

Through the tears in my eyes

And I realize I'm going home

Minus the tears, it was all there. I was home.

this maid my cry

You do know how to use F3 to locate the spawn, right?

F3 for me tells me my frames per second. How do I use that to locate the spawn point?

Ben, I just looked it up,
"Before going on a long journey a good idea is to go to your house, then click F3 (This opens up a list of info, click F3 again to close) and write down X and Z coordinates. Now, go on your journey! When you want to get back then you click F3 and walk until your X and Z coordinates are the same as what you wrote down at your base." Wow. Very nice. No way I would have known that. Thanks!

I myself have gotten gloriously lost in minecraft on a couple occasions. I usually opt for the "stake out and mine 'till I have a compass" approach. I might take forever, but you feel accomplished and you end up with EVEN MORE LOOT when you finally arrive home.