Sitting in the dentist's waiting room, I found I couldn't browse the internet on my smartphone anymore. My eyes were tired from reading and there were no headphones to listen to music. There are no magazines at this dentist's office, just an old TV playing Russian music videos ad nauseam. Mostly female Russian singers, and curiously enough they all shared similar traits: they can't dance. They look gorgeous, but the best they could do is small movements and two slow moves at best- a huge difference from western female pop singers, who are expected to dance as well as lip sing.

There was at least thirty minutes more of waiting, what was there to do? I thought about playing games on my phone, but then I remembered my distaste for them. Gaming on smartphones with no keypads is cumbersome. Controls are simplified or slow to respond, so it's hard to play skill based games that rely on accuracy and timing. On graphic heavy games like Dungeon Explorers there are long load times, so long that it kills any of the fun of a quick gaming session. Simple games like Angry Birds are more frustrating and shallow than fun, but that's just my personal preference. Lots of people swear by Angry Birds, but it's not my type of game.

I wanted a simple game, one that would challenge me, and yet be tailor-made for touch phones. A game where accuracy and timing did not matter, but was strategic by the choices made. Strategy games mainly. Not a strategy game where it has a massive setting like Civilization, but more personal like a one on one. Something with a simple interface so that it would load quickly and hopefully be resume-friendly for quick gaming sessions over time. And then an idea came: how about chess? 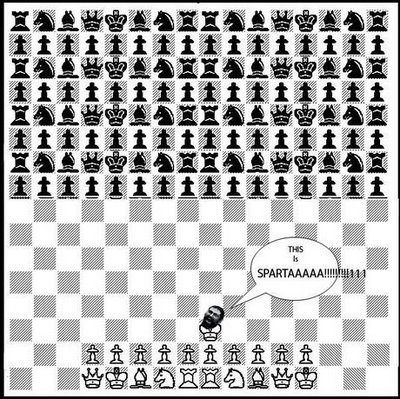 It's been such a long time. I had friends in the chess club in junior high and would often watch them play. I knew the rules, but in the Super Nintendo era, I would rather play video games with shiny new graphics than a board game with little visual appeal. Chess video games were ugly, trying to be trendy and relevant by displaying themselves in 3D and not doing a very good job at it. Chess and other board games just didn't transition very well into the digital age during that era.

Years later in high school, I got a small chess set to play with my father. He didn't play video games and I wasn't a hands-on person (he spent most of his time fixing our cars and maintaining the yard), so we didn't share many activities together. I thought that if we played chess at least once or twice a week it would give us something to look forward to. But I was wrong. Chess is a one on one game based on beating your opponent. I didn't want to beat my father in chess, I just wanted to play along with him. I didn't want to sit there for thirty minutes playing against him, so we stopped after a few games. With that mistake, chess faded into a not so favorable memory and was left in the past.

Chess, though, has without noticing, become a very viable platform for touch based systems like tablets and smartphones. With touch based interfaces, they play very similarly to their real counterparts. The graphics have also improved. It's not that the 3D of chess sets look any better or less clunky, but now there is a choice of playing a game within a flat 2D surface, where it achieves a very attractive classic and clean look. 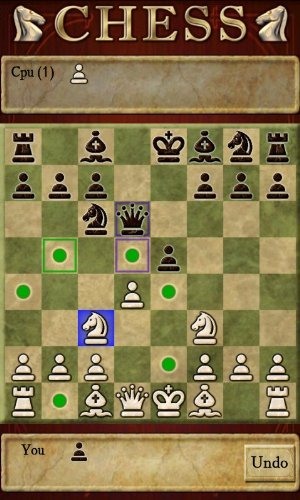 Chess is also massively competitive. Taking it seriously, it is now very relevant to today's other competitive online games. Left 4 Dead, SF4, Call of Duty, Star Craft 2, Dota, League of Legends, and other games with a competitive online presence have slowly weaned gamers into a very competitive environment that was not there before. A decade ago most games were single player affairs. Nowadays, most games carry a multiplayer component, even if the game is mostly single player (Uncharted, MSG4). For the most part, a large portion of gamers today expect a certain level of competition, myself included. 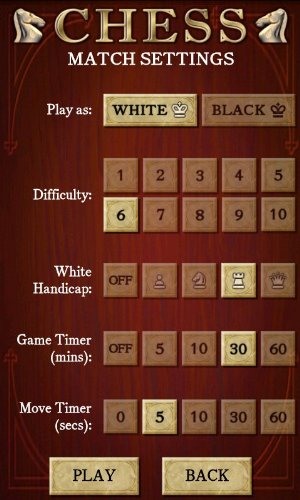 Chess fits perfectly with this mindset. You can play against the computer or another person, and gives the same competitive challenge as any of the major video games out today. It boils down all the skills and strategy to its most basic form, giving the player direct access to the core of player versus player mechanics. With this in mind I downloaded the most popular chess game on the android market and I was not disappointed.

To put it simply, as I was playing my first chess game in 14 years, it felt like I was playing a stripped down version of a DOTA (some call it MOBA) game like League of Legends. I saw the pawns, but their functions were more like minions: Always going forward, no special qualities, never stopping. The pieces in the back resembled Heroes with a single skill that made them powerful. These pieces like the rook and the queen moved as they liked, with zeroing in on their next kill as their only intention.

The first game was not the best game. I was slaughtered. Against a beginner level 1 computer AI, I lost in six moves. The second game did not go as well, as the computer's queen moved around the board killing 9 of my pieces in a row, with the eventual checkmate. Every time the queen ate one of my pieces I started to hear this in my head (The voice announcer from League of Legends):

"The queen is dominating"

"The queen is unstoppable"

"The queen is godlike"

My mental image of the queen at this point: 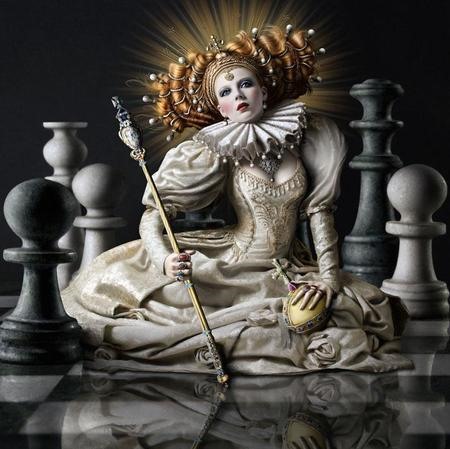 ...and as the game went on I really felt the death of every one of my pieces to this magnificent queen. Before I would have thought "oh, the opponent just took my pawn, oh well", but now, seeing this in a different light, I can see how the queen itself individually dismantled my entire army. Just one piece brought so much havoc. I must watch out for this piece, I thought, it is dangerous. In the subsequent games that followed I was able to subdue the queen, but only to have the rook and towers pick up the slack for even more losses.

Chess is now a permanent staple of my gaming diet. I've lost 14 times since that day but the games have gotten longer and more aggressive. Pieces are sacrificed, alternatives routes get figured out, and the sweet satisfaction of taking that darn queen from the enemy is always a good feeling. As a gamer that likes a challenge, chess has now become very relevant due to today's environment. It's a perfect pickup game for your phone and tablet, and it gives you the same amount of challenge and satisfaction as other major, bigger games. If you're bored somewhere and don't feel like browsing on your phone, give chess a try. It's not for everyone, but it never hurts to try a free game.

Try it on Android. Chess Free is a really great game, with multiple AI levels using the amusing Treebeard engine. Or try it on iPhone (or any iOS related system, for that matter).

Want another strategy game? Try Go on Android! Surround your opponents, choke them to death! Well, you get the idea...

Life Hacks for Your Smartphone

I like the parallel you've made, interesting. I'm not a gamer, though I'm exposed to many different games being involved with WonderHowTo. I do love crossword puzzles, and as a kid, I loved scrabble. I enjoy the Scrabble World on WonderHowTo very much, but when it comes to playing, I'm somewhat put off by the fact that players can create steep advantages by memorizing obscure words. Interestingly, I've been considering chess lately. I've never played, in fact I don't know how. Is it complicate to pick up for first time players? I thought it seemed so as a kid, but that's from a kid's perspective...

The rules are very simple, it doesn't take more than a few minutes to learn how a particular piece moves. There are 6 unique pieces that repeat themselves( 2 towers, 2 rooks, 8 pawns,etc) so there isn't much to memorize. The hard part is remembering and keeping track of what pieces can move where during a game. Usually it's like "ah crap I forgot the rook could move all the way down here, I didn't see it had an open lane". The easiest thing to do as a beginner is to look at each of your opponent's piece and ask yourself "can this piece move at all?". Do this for all pieces, regardless if they are boxed in or not, some of them can jump places.
Set small goals for yourself. If you die in 6 moves, then in the next game, try to last at least 10 moves. For me, I try to figure out 2 different ways of moving per turn and choose the best one. Usually one would see an obvious place to move to but sometimes that can lead to a trap. Finding different ways to move per turn can help you see that. I've been playing defensively so my next goal will be to actually lay out a trap to my opponent, but I think I'm far off from that goal right now.

Last advice is not to take losing seriously. Play against the computer at first so losing doesn't feel that bad. Think of each loss as a teaching game. Like when that queen destroyed me, it didn't deflate me to give up on the game but it made me more conscious of her moves for every game after. Btw, Kari tried chess after I told her my story and as a curiosity she played a game and was decimated by the computer. I think she said "screw this" and moved on lol.

Some games click and some don't. I have no talent or skill for crossword puzzles/scrabble/ sudoku. And I've tried too, especially crossword puzzles. Even the children's versions I was terrible at. So if chess doesn't work out for you, be content that I envy your skills in games I have no affinity for.

hmm, I guess I'll try playing with the computer first.

Great article. I've always enjoyed chess casually, and think that everyone should give it a try once in a while. Not to mention, it's such a popular game that the pop culture references to it are endless. It's important to know what each piece does, at the very least.

I'm not big into League of Legends, but I found the queen-speak pretty interesting. And as much as I love Scrabble, I'm also a pretty big chess fan. I'm no pro, but I win a game every now and then and play on my iPhone all the time. Like JD said, learning chess is pretty easy, but learning how to win takes time. You'll never truly learn how to win a game until you've lost in every manner possible, learning from mistakes. So, it's ordinary to be pretty bad at first—but eventually you'll get better. One of the first things to look out for when playing the AI is the fool's mate. If you haven't played before, you could fall victim to it—the quickest possible checkmate. And it's fine to lose against the AI with it, but if you ever play anyone—it's pretty embarrassing, so watch out! Maybe even try to do it yourself. But this is the one strategy that is easiest to combat, because once it happens, you'll never let it happen again. Others are more elaborate and harder to remember.

Man i need to get back into playing chess. This article just made me download chess on my phone.

Me too. But I was always bad at it.