Do you ever really know someone? I mean really really? Super really?

Sometimes we can talk and be with people normally for years and then bam: five people dead, house on fire, dog missing. All the while people shake their heads and regret that if they had just put the little clues together all of this could have been averted.

Well, such a clue has come.

My wife and I play Minecraft with my uncle. He is a great guy: funny, outgoing, will bend over backwards to help you, and always cheerful. Around two months ago, we introduced him to Minecraft. He's in his late forties, but he's beaten Half Life 2 thirty times, and is almost done with the Starcraft 2 single player campaign.

He didn't get it at first. I showed him the game, ran around and explained to him basic crafting and survival techniques. I told him what people have done with the game and how people approach things in unique ways given basic materials. I left him with an extra Minecraft account I had, just in case he was curious, but his first impression of the game were not good.  A week passed and by surprise, he called me up and told me that he has been playing nothing but Minecraft and had a lot of questions! By that point, we told him to play on our multiplayer server so that we could share and help each other.

The server we are on is a private multiplayer server. Only eight people or so are white listed to enter, and being new to the game, we only had a week's head start before my uncle joined. My wife and I made a small house with a nice courtyard: 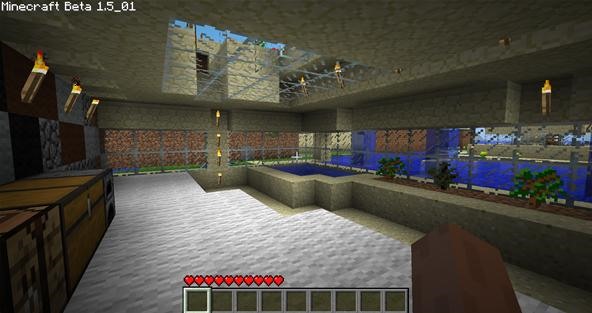 Most people build nice, pretty, or large things when they try a building type game. A nice little house, a tall glass skyscraper, a beautiful garden, a tremendous sculpture carved into the side of a mountain, a great transportation project, anything. Not my uncle.

A day after he joined us, we noticed a new structure to the side of our house 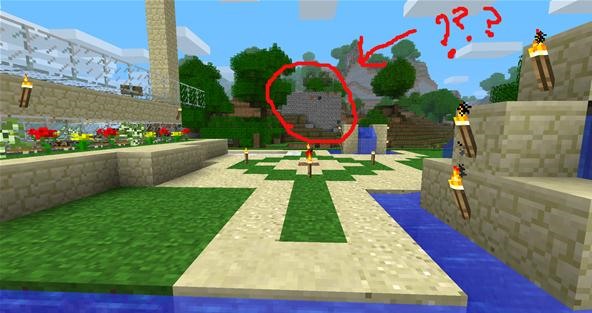 What was this monstrosity? It's dug into the hill, made of stone, and only one window? In comparison, most of the people in the server built beautiful sandstone structures and gardens for their first homes: 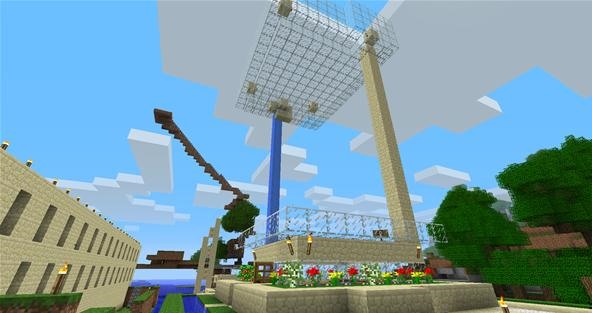 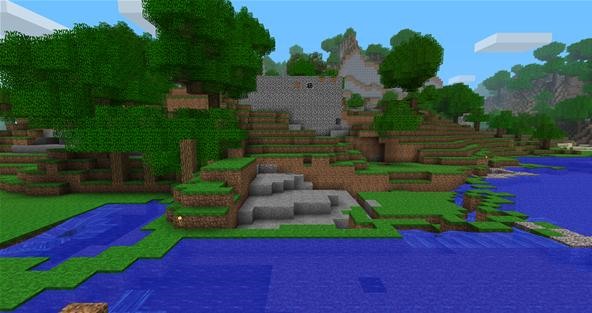 What kind of structure is this? An all stone square warehouse with one window and no doors? Just to be sure, let's take a closer look: 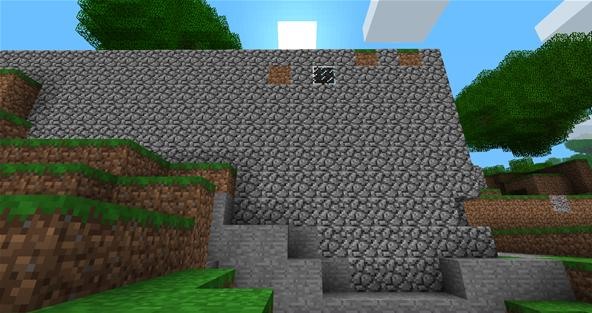 Oh god, he is going to kill us all.

This is the type of house serial killers would love to own and work in. It has the "there is stuff going on in here and at night I will creepily stare out this window directly at your courtyard" type look. Circling the Jeffrey Dahmer retreat we noticed there were no doors, so we broke inside: 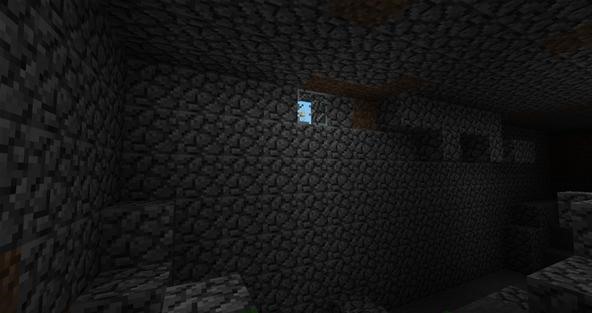 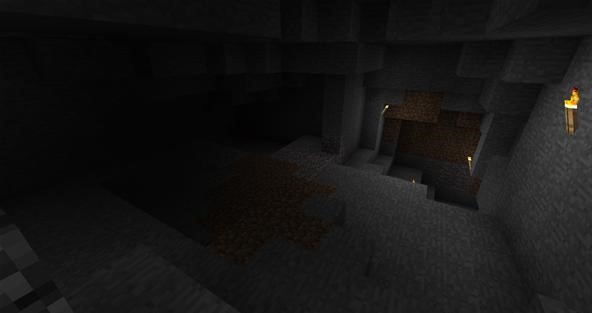 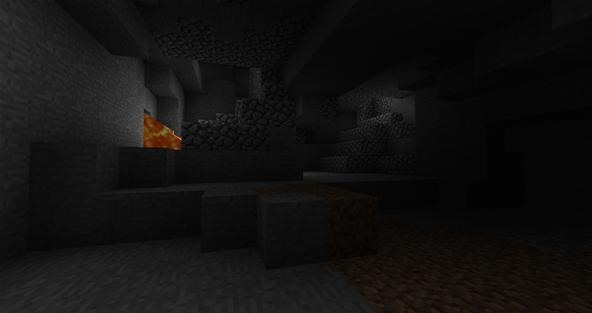 What the hell uncle, it's just as bad inside! What real life number do I use to turn you in?

But maybe it's just an overreaction; let's just objectively describe what's going on: 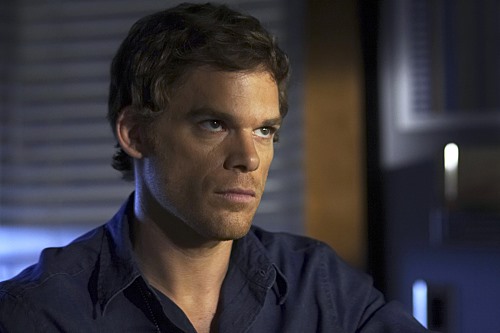 Just as a poem or a drawing can reveal a lot about the true nature of a person, so can the actions of what you choose to build or do in games. In this case, we are going to turn a blind eye to what is going on, in the hopes that we will be spared or lucky enough to be left for last. Family, it will kill you.

ahhahah, dexter and minecraft! im starting to like this world more & more.

oh my god. that is hilarious..

thanks. To be fair, after a couple of weeks of watching us and other build things, he finally got the gist of things and started creating better structures. It was just very amusing to see how a person approaches their very first building survival game and what they consider important. In his case it was function over style, but I've been too scared to ask what that function was.

Strangely enough, this makes me want to actually try out Minecraft now.

You should. We were also late to the party and have only started to play recently. the hardest part of the game is that first day, but once you pass that it's great. If you do play try playing on a server (i can send you a server invite to mine), it's a whole new game when you play with others. You get to do community projects (mine was building the railway system in town), barter, go on cave explorations with others, and get inspirations from other's work. There is the danger of someone stealing or sabotage, but that's why you only play with people you trust or know how to track down.

my last comment didn't post, I've been pc gaming since 1992, I missed the ship on minecraft's initial popularity... and want to play... if you could e-mail me information to bukoman at google's popular email service dot com that'd be great!

Id love to join a beta server but I can find a good one without griefers and those kind of people and just want a good server with group projects and bartering. If I could join yours that would be great but if it's privite I toataly understand.

I sent Michael a private invite already (unless i sent it to the wrong email). Just leave me a msg on my wonderhowto mailbox with your actual email and your mc player name and i'll send you the details for the server. It's a small server, 8 max at once (so i can't give too many invites), but people consistently log in after 10pm or so and randomly during the day.

Ha. All the Google ads on the page don't even touch minecraft. I'm seeing save money on inmate phone calls/private investigators/appeal attorney...

The ads I see are all about theraphy and home mortgage lol. Ad"sense"? More like Ad"omgidontknowhowtoreadthingsincontextsohereisabunnywithapancakeonitsheadandadsonpancakes".

Could be a cool psychology experiment, gather a couple college students, tell them to play a video game. Observe how they prioritize, organize, would be immensely interesting. A lot cheaper than sending them into the forest.

There is already an elementary school teacher doing just that, he's called the minecraft teacher:
http://minecraftteacher.net/post/3922255282/a-classroom-experiment-with-minecraft

basically he taught his first and second grade classes how to play minecraft and they work together in projects. You can read his previous entries for some amusing stories.

hmmm looks like my house. except i flooded the whole thing with water.