[Spoiler Alert! Plot points are discussed from the movie and comic in this section!] 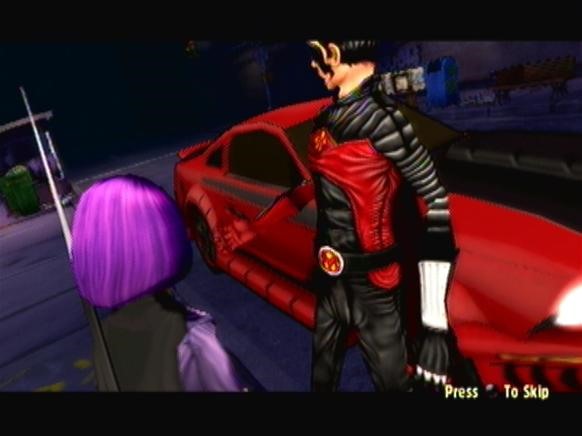 Big Daddy as a selectable character presents problems for the story in the game. In the movie and in the comic, Bid Daddy dies. As a playable character this presented a problem if you were playing Big Daddy and suddenly to got to the part where there is an ambush and betrayal. The ambush in the movie and the comic have Kick Ass and Big Daddy caught while Hit Girl disappears. In both versions this leads to Big Daddy's death. The potential loss of a playable character in the game by this event is handled by showing an ambush kidnapping of whoever is not being played in the game. If you're doing a single player game of Hit Girl, you see Kick Ass and Big Daddy being kidnapped. If you're playing with Kick Ass and Hit Girl, only Big Daddy gets kidnapped. Regardless of who gets taken away, they are rescued in the next level and the game continues. This way you get the torture scene without having any loss of main characters. 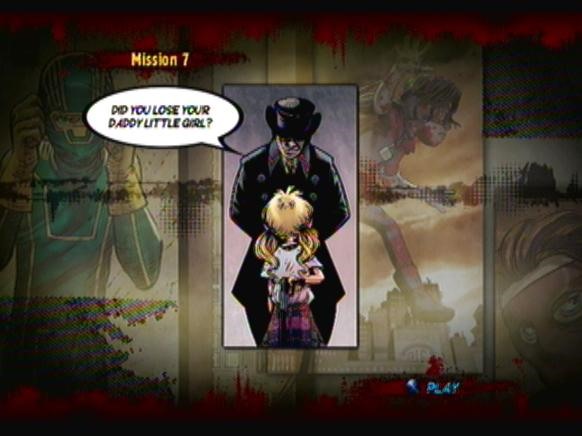 In cut scenes, the story is an interesting mix of the comic following the movie. In reality, the comic is very different from the movie. They only share a few similarities, and certain things are handled much differently. For example, the way Big Daddy is ambushed and killed is different for both versions. In the comic, Kick Ass does not get the girl and his father plays more of a role in the story.

Frozen Codebase merged the two works by creating original art to match the comic to the movie and moving some of the original comic scenes to different scenarios. The school girl hiding the gun image above never happened in the comic, it was created solely for the game. If you've read the comic you'll spot where the images are originally from, and how they are now used to further the game's own plot.

On the technical side, the engine used to power the game has it's plus and negatives. From the Shacknews interview:

".. But thankfully, we've got our code base, which is kinda tailored towards a fighting system. With Metalocalypse, we created this generic sort-of fighting system for the Vicious Engine so that we can do fighting style games with proper timing between combos and chains. "

"We made [the codebase] generic, so that any fighting game we do, we can just use the same system."

"We're basically a Vicious Engine house--most of what we do is in Vicious and now we're upgrading to Vicious Engine 2--but the thing about Vicious, it wasn't originally made to be a fighting-based engine. So we just saw that we needed to make some enhancements-" [1]

Frozen Codebase's version of the Vicious Engine[2] has great camera movement but suffers from lag when dealing with too many objects. Mentioned in part two of this review, the camera view for the game is great. It never calls attention to itself by being obtuse or intrusive. For most of the game it's very easy to focus on fighting because of the camera. When dealing with more than four enemies though, the engine suffers. Once you have that many characters on screen, there is slowdown. Very noticeable at first, you sort of forget it as you move on and get used to it. Still, it's a little dissapointing that this had to appear in an action game. The graphics that this engine is able to output are very bright and colorful, giving it an almost cell-shaded look. The character models are not too blocky and the main characters are animated well enough that they stand out with their special moves and attacks. 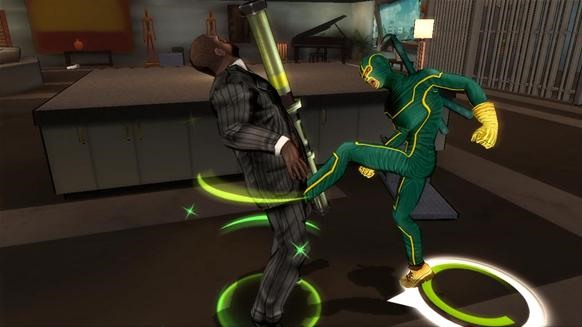 The price ($15) for this game makes it hard to figure out if the game is worth the cost. This is the second movie to digital game out there, as most movie games come out as full priced $60 DVD/Blu-Ray video games. These are full length games at full price. Instead of comparing Kick Ass to over movie to game releases, it would be better to compare them to other down-loadable content that is around the same price range.

For the consumer, you can get a lot of quality games for $15 and under. There are Trials HD (XBLA), Shadow Complex (XBLA), Puzzle Quest, Penny-Arcade Adventures, The Secret of Monkey Island: Special Edition, Marvel vs Capcom 2, Mega Man 10, etc.. These are all quality games that are either ports or original games created specifically for digital downloads. Kick Ass does did not have the production time or the budget of lets say, Shadow Complex, but in the end, they are both the same price.

Counting on fans of the movie or the comic to buy the game at $15 is a risk, considering that there is a planned dlc coming out, adding more costs to the game if a fan wants to experience the complete package. On DLC, Ben Geisler states

"But this isn't a quickie one-off production, as the company is already planning a down-loadable add-on--one that will hopefully hit within 45 days of launch--to bring online cooperative multi-player, new missions and a new environment into the game (at launch, the game will have offline co-op, eight missions and three playable characters). " [1] 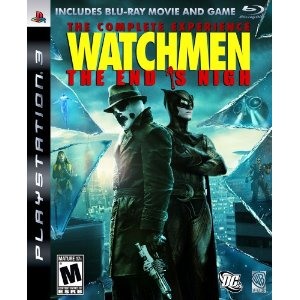 I mentioned earlier that Kick Ass was the second movie to game dlc to be released, the first movie to dlc game to come out is Watchmen: The End is Nigh[3]. The game was originally released digitally in two parts, but can now be bought completely for $20. If the future dlc for Kick Ass is priced at a minimum five dollars, that would make the game comparable to Watchmen, which had a much higher production and development time than Kick Ass. At a possible twenty dollars, the game will also compete with all the regular disc based games that are now being sold for twenty dollars because of age. I really think $10 for the original game and $5 for the incoming expansion would have been the sweet spot for this game. It's understandable why it launched at $15, because that's the current pricing market structure. Two years ago new games launched at $10, but now games launch at fifteen. Soon, twenty dollar digital games will be common. The pricing was probably a factor they could not change.

The Kick Ass game as a PS3 only release is very curious. Geisler's response to this strategy:

"Shack: That leads to a question I had. Why just PlayStation Network for Kick-Ass? Why not Xbox Live Arcade?

Ben Geisler: That's a question we're asking, frankly [laughs]. Obviously, when you've got a code base that supports everything from PS3, 360, Wii, I mean...

I guess the thing about it is, Sony's support is so great. And our publisher, WHA Entertainment, have been looking at it. It just really made sense with the marketing tie-ins with Lionsgate, and they were offering to help us out with PS Home, so that you'll be able to have Kick-Ass costumes and capes and clothes and Kick-Ass's bedroom, that kind of thing, in Home.

For a publisher, it makes sense. All this extra marketing is gonna help move the product, and that way we just focus on PS3. I think if we went multi [platform] launch, neither of the first-parties would have really given us that same level of support, theoretically. " [1]

I actually logged in to home for the first time in months and went to the mall. I couldn't find anything Kick Ass related. Maybe it will be released for the upcoming expansion. If they got a really good level of support from Sony then it would be understandable why they chose to be exclusive. Let's hope they can bring this game to a wider audience in the future by porting it to the 360, if the exclusivity contract ever runs out. If I had to choose on where to originally buy it, I would have done so on the 360, but that's just a personal choice. 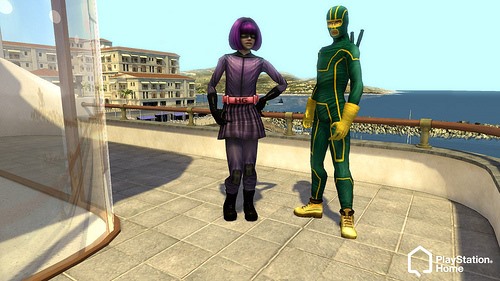 3. Copy the secret code and enter it in home to download the costumes.

Again, this is for Europeans only. 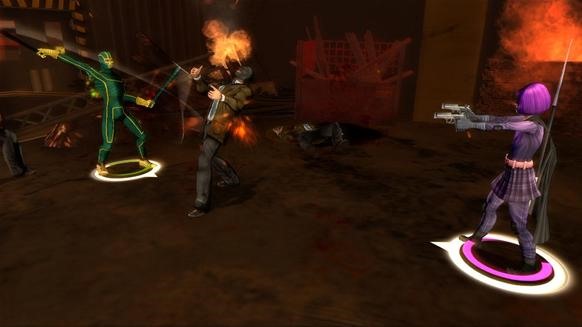 Is the game worth it? For fans of the movie or comics it is. The game play is solid. The co-op is a lot of fun. Having most of the original voices keep you in versed in the game. Extreme and arena mode more than double the lifetime of the game. You could even get a trophy if you manage to level up one of your characters to 50! For the non-fan, I would give the game a C. As a fan who liked the movie, comic, and felt that the game is a nice addition to the Kick Ass world, it's a B.

Final Rating for Kick Ass: B