The order was given months ago:

Build me a royal garden.

I dunno, with crops n stuff.

Those were the words of my (formerly serial killer) uncle, whose castle sits in the middle of everything, requiring a garden fit for a king. The yard behind the castle was unused, with nothing but grass and candles. This area in question, highlighted by the red circle (click on any picture to enlarge): 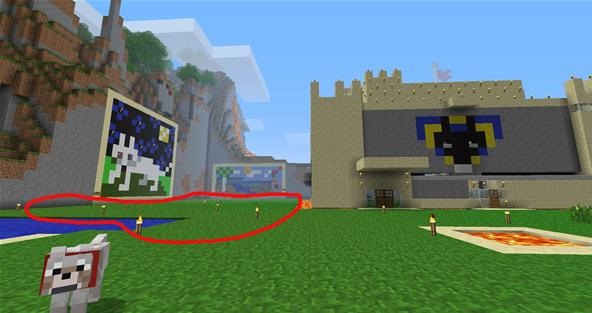 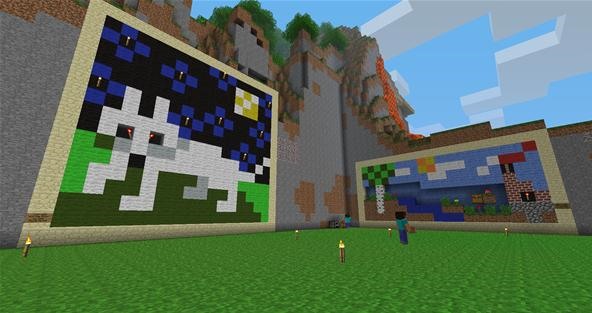 To build something befitting of a royal garden left many of us dumbfounded. How does one build a large palace garden in Minecraft? There are only two types of roses, red and yellow. There is an asparagus looking crop that is useless outside. Stepping on it (animal, monster, or human) destroys it automatically. Cactus belong in deserts, and there is nothing royal about sugar canes. Mushrooms? They would be more at home in a salad bowl.

And so for months the project was left in favor of other muses. New towns were built, new rails constructed, and mountains cleared or dug through. Anything was better than starting the garden.

Today, while climbing a mountain, I caught a top down view of the empty space, still lightly thinking of ways to make a royal garden work. An idea came to mind,

It doesn't have to be symmetrical or grand. Just make it natural.

That was it! The spark! The problem with the space is that it was too trimmed for it's own good. Surrounded by strait walls in a flat ground, a garden would be lifeless with so much order. Before this,  Kari and I were tossing around ideas of a picturesque Victorian garden, with uniform flower beds, geometry, and an endless green lawn. In the literal sense, that's what we thought of when we imagined a palace garden. 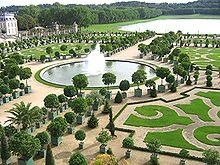 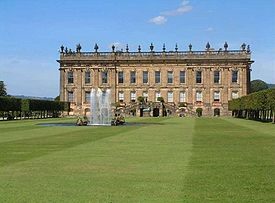 To turn this garden into something special, it would have to look as natural as possible. Everything in here has to look as if it was always there. Wild grass everywhere. A river with no true form. A small hut in the distance. A nearby rustic well. These simple things would be the beauty of the garden. 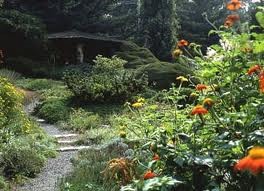 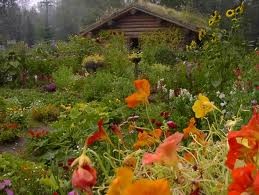 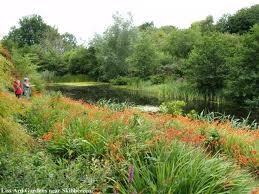 This reminded me of Tom Stoppard's Arcadia, in which the owner of a large estate (500 acres) cried to her land developer (Mr. Noakes) over the transformation of her traditional manicured garden to a unkempt and rustic gothic swamp.

-look! Here is the Park as it appears to us now, and here as it might be when Mr. Noakes has done with it. Where  there is the familiar pastoral refinement of an Englishman's garden, here is an eruption of gloomy forest and towering crag, of ruins where there was never a house, of water dashing against rocks where there was neither a spring or a stone I could not throw the length of a cricket pitch. My hyacinth dell is become a haunt for hobgoblins, my Chinese bridge, which I am assured is superior to the one at Kew, and for all I know at Peking, is usurped by a fallen obelisk overgrown with briars-

The same—but not to that extent because of the small amount of space we have to work with—was applied to this royal garden. Along with Kari, the work began right away and in a short amount of time the garden that had stumped us for some months was finished.

The first thing we focused on was building a river that would look natural. It couldn't be straight, or consistently at a certain width. The river had to look like it was naturally created, with plenty of imperfections. But where to begin the river? For this we borrowed Kari's original canvas and decided to make the water come out of the painting! This is the original canvas: 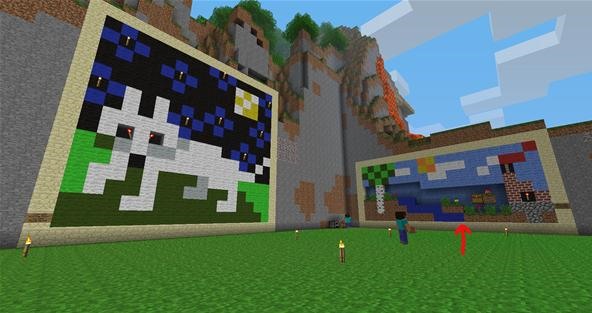 It was just a basic painting, but what if we made the river in the painting come to life? That's where we began the river. 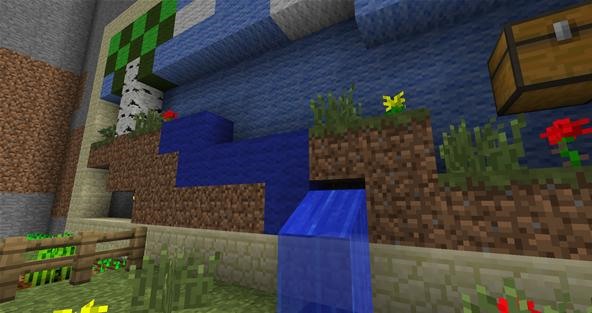 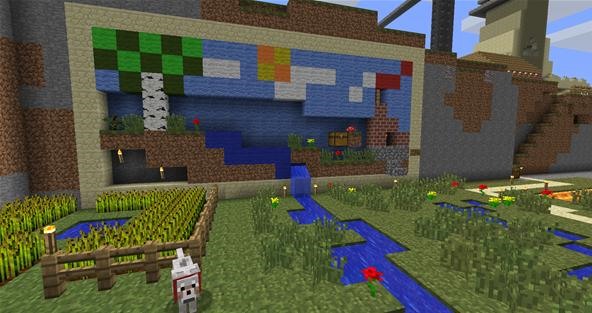 Slowly I would vary the width and direction of the river, ending it at a nearby lake that was there by chance. Here is an overview of the river: 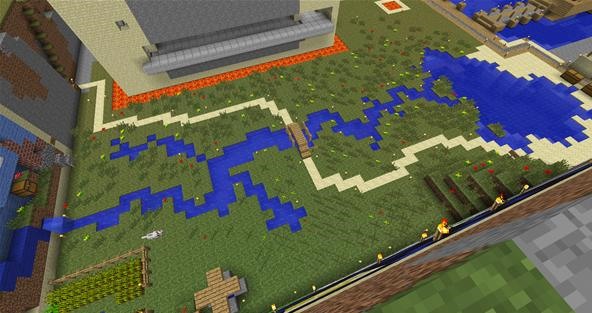 The lake, where the river ends, was also modified to look more natural. Originally, the lake was very squarish, with many straight sides: 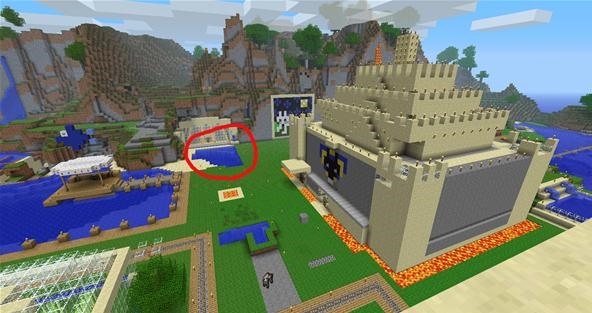 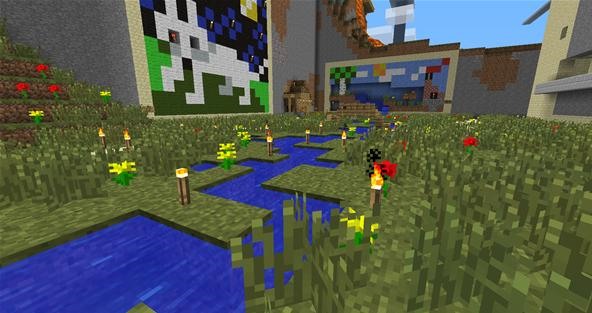 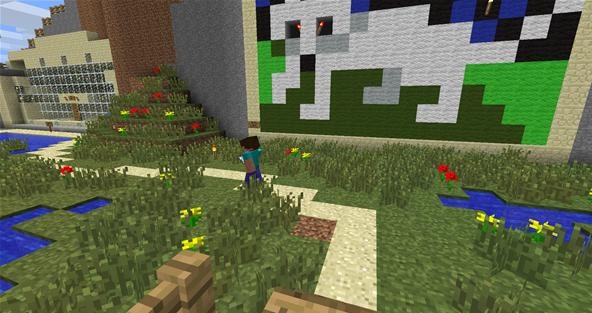 The garden path was also kept in an uneven shape so that the eyes would not focus on a pattern. A small bridge was built to cross the river and a simple living cottage, complete with a dog, small crop, and a water well were put on the side to give the garden a rustic feeling. 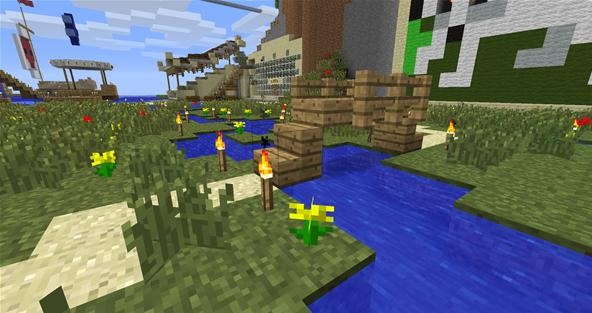 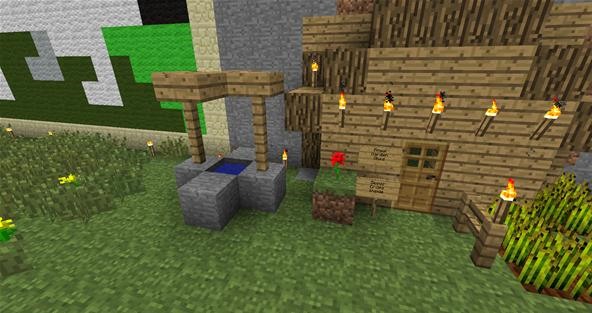 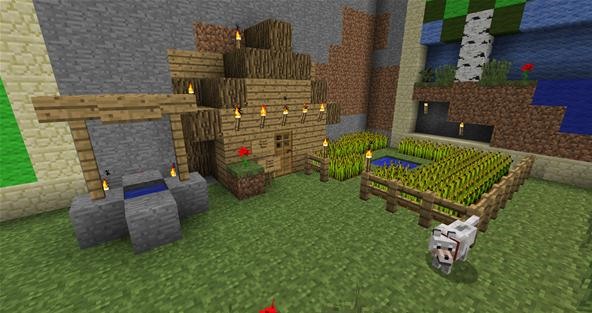 The view from the palace: 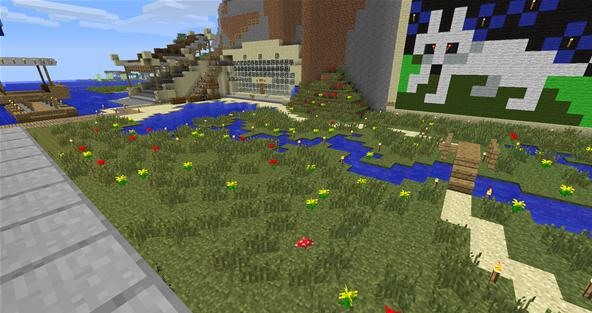 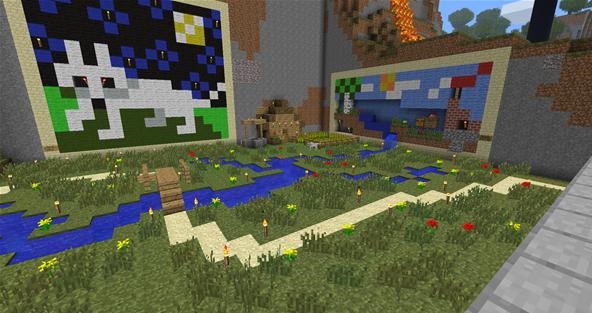 There are some minor touches left to do but the royal garden is complete. A tree or two, some moss stones here and there. True to the nature of Minecraft, the garden is made to look simplistic, with minimal touches here and there. At least that's suppose to be how it looks like. In truth, it took a lot of work to design something that looks as if it was always there.