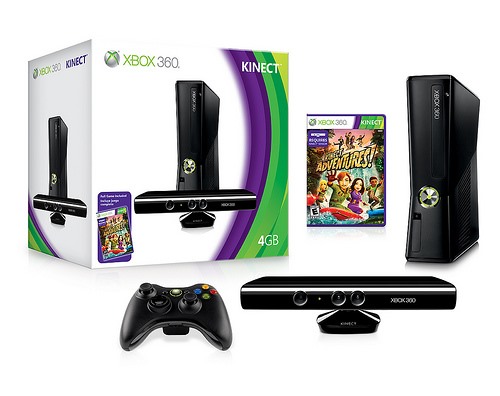 Kinect Pricing: Existing Xbox 360 owners can purchase Kinect and Kinect Adventures for $149.99 (U.S. ERP). Remember, Kinect will work with every Xbox 360 ever made.

Kinect Holiday Bundle: Available later this year will, the bundle will contain: Xbox 360 4GB console, the Kinect sensor and Kinect Adventures packaged together for $299.99 (U.S. ERP).

Pre-order Kinect or the Xbox 360 Kinect Console Bundle today, and at launch receive a token to download three exclusive game levels for Kinect Adventures, the game included with Kinect.

Kinectimals, Kinect Sports and Kinect Joy Ride will retail for $49.99 (U.S. ERP) and are part of the 15 Kinect games that will be available at launch.

So there you have it. It is $149.99 with a pack in game. Packing in Kinect Adventures instead of a Wii rip off sports game is a good thing. I still think it's 50 dollars too much. Microsoft said previously that they are trying to make a serious push, but without competitive pricing, I don't think it will succeed.

Neogaf via Kotatu got some price comparisons: 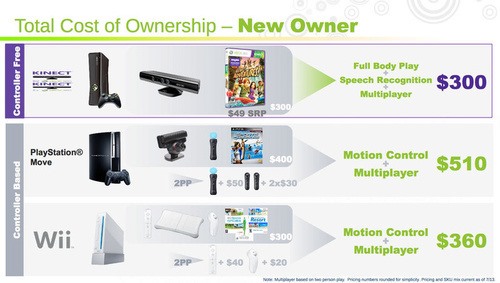 This chart favors the 360. The 360 system is the 4gb model, a joke to any real gamer. So you actually need to factor the price of an actual hard drive, which adds a $100 to the cost.  It's accurate on the PS3 costs but on the Wii, the balance board is optional so the overall price can be less. The 360 does not mention that multi player is not really included because that service is $50 a year. 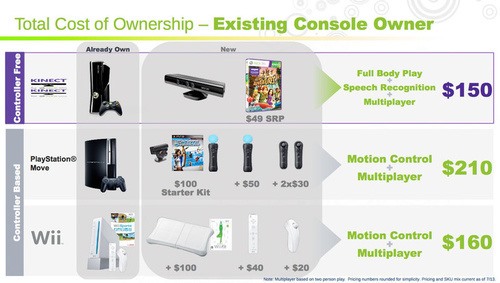 The chart above is a little bit more balanced. The only thing I would change is the Wii balance board, except for a few games it's not really needed. The only argument one can give for the inclusion of the balance board is that if you want to play a fitness game like on the 360 and PS3, you need that balance board on the Wii.

360 Kinect will be released on November 4 and PS3 Move on September 19, giving the PS3 an early head start. I don't know if Sony is demoing their Move controllers, but you can preview Kinect at the Microsoft stores or at Macy's, depending on the tour dates.