What is with this heat!? It really saps you from doing anything at all!

Ah I missed the august thread. Well it was all League of Legends. It's a three year old game but it's so widely successful that we still have to wait in a queue to play sometimes. Let's see, 15 million registered users, 500k players average players on at all times?

I also played Deus Ex 2. I was really disappointed. The animations and voice acting were of 1995 quality. Bodies that don't move in cutscenes, robotic stiff movements, and stale voice acting. It is sad that mindless first person shooters have better in game cinematics than a sci-fi rpg.

Back to League of Legends. It is good. Addicting good. It's Tower Defense + Lemmings. Interested in Dota 2 and saddened that it is still  six months to a year away, I wanted to try a dota type game. Looking at the videos, dota games are confusing, you don't know what's going on. There is action everywhere and the expert commentary just confuses a new player even more.

League of Legends has an excellent on hands tutorial when you start the game for the first time. It understands that it is a complex game and new players need time to adapt. The initial pair of tutorials take around twenty minutes to go through, but it's all spoken, and once you are done, you can play the game without any problems. 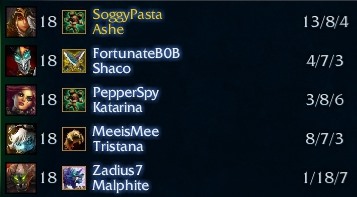 I'm soggypasta above. It's not the greatest nick, but it does the job. We have around six players (most of them in the picture too) that play LoL(short of League of Legends, it was confusing at first to see this in forums, now I finally know that it wasn't a misplaced laugh). We almost play nightly for around an hour or two. Matches can range from twenty minutes to over an hour, so this is not a quick game. In LoL you can play against others in a 5 on 5 or against the AI. Our group is currently playing AI matches only. Pvping against people in my experience only leads to blame and feeling sour after an hour of work. No one in the group wants that. It happened in Guild Wars, Starcraft 2, and other pvp games, it's always the same thing.

As for Dead Island, what a mess. It's a fun game, but with so many blunders in its week of release, it is hard to enjoy a game that gives you so many problems. Right now multiplayer isn't working on PC, and that's killing all the initial hype to play the game. It works fine on LAN, and if you really wanted to you could setup a virtual lan and play with friends over the net. But you shouldn't have to. It really feels like this game was released in Alpha state. Dopefish made a youtube on this game, and the animations are horrid. Btw, he's using Noclip, a setting that incorrectly came with the game upon release:

League of Legends AI scales surprisingly well. When you start at lvl 1 the enemies are easy. As you gain levels with many games under your belt, the AI starts to work better together. By level 15 they are some cold hearted mofos that comes from behind and stun you 20 times in a row.

Our LoL group have been getting stomped by the AI at lvl 15. Today is the first day we've actually won in any convincing manner. That was my best performance so far but I've seen much better. Last week I saw a guy get 50 champion kills with Ashe.

Found a great chibi Annie drawing on DV from Dcheeky-Angel: Well it was cute enough to change the header for this site. In game though, she's a monster.

A few days ago we watched the 1956 musical The King and I. It was very good. The songs were average but the comedy was funny and the sets and costumes were gorgeous.

On a particular exchange, the King tells Anna (the palace school teacher),

"A promise is a promise! Head must not be higher than mine! A promise!"