Personally throughout all of Mario's dozens of games throughout the decades, my favorite is still Super Mario Kart for the Super Nintendo. 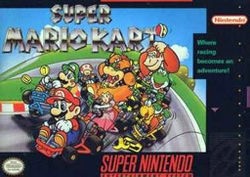 It's a game that's easy to pick up and play with others for hours on end. Mario Kart also started the whole kart genre in video games, with other franchises creating their own kart games. It was just so much fun to bump into things, jump, or ruin someone's driving with a power up. Before Mario Kart, most racing games only cared about being the fastest and winning times. Mario Kart made the race itself fun, and along with the Mario personalities and uniqueness, made this game my favorite Mario game.

Currently, because of my lack of a Wii, I can't play the latest version of Mario Kart. I'm waiting on Modnation Racers coming out on the PS3 next month to satisfy that itch.

I like the original! I recently found my original Nintendo + games, and I couldn't wait to break out my Super Mario Brothers/Duck Hunt combo.