The game of the month has to be Minecraft. There is some serious addiction going on here.

My current project is building a huge museum of sciences, where people can go and see how things work:music boxes, light loops, the distance that a gold rail will carry you, etc.. That way if someone has a question, they can pop in and see a live example. I'm still creating the foundation for the building, my guess is  it will be a few weeks before it's fully finished.

The next game I'm truly looking forward to is Dead Island, but that's a few months away.

Writing about Kari's experiences took some effort but it was fun. Because they were quick sketches, her writing was not given very much effort. The original comics were also done in the traditional form. This one in particular was sketched in regular line paper, hence the lines (click for larger size): 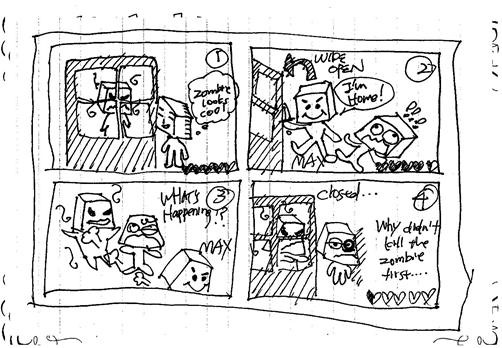 This actually looks decent but I restructured it in the format of a Korean web comic because those comics are made with the internet in mind. They are lean for pages like these and they are scroll- friendly. For the one about the dead wolf, some edits were made to shorten the story. The Original: 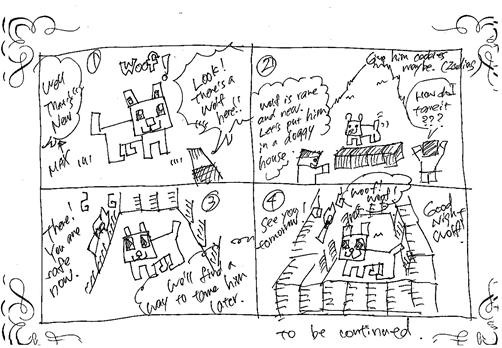 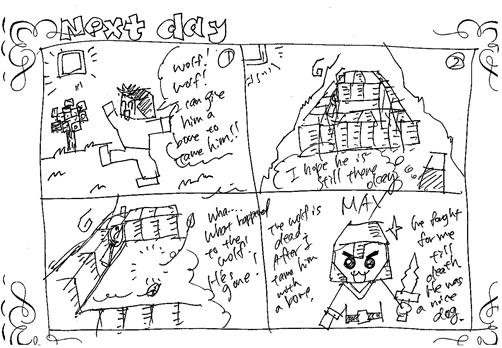 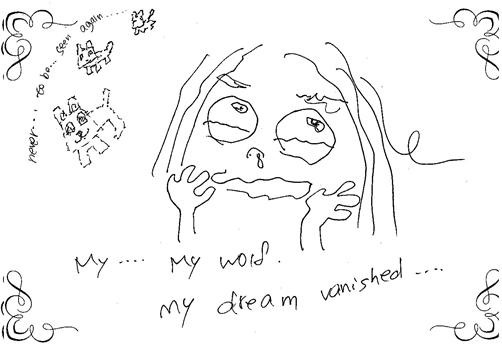 And then there are some that are just hard to explain: 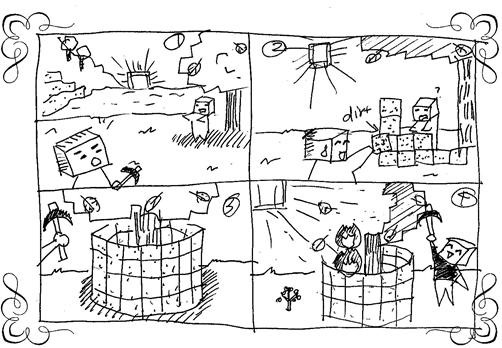 The one above is based on a story that my uncle told us. He said that sometimes when he walks around, there are zombies waiting for him in the shade of a tree. Either the zombies are stuck there by bad programming or because they know that the second sunlight hits them they burn to death. Regardless, these zombies tend to stay there.

What my uncle does is not kill them directly. No, that would be too easy. What he does is he builds a fort around them, trapping the zombie within. The he gets his pick and chops away the tree branches, letting the sunlight in and burning the zombie to death with nowhere to run.

That was pretty sadistic, but in a funny sort of way.

Picking up Child of Eden today, will post  impressions tomorrow.

Musical games are a hard to categorize. Is it an experience? Is it something that has replay ability? You would think that if something is an experience it you would want to replay it over and over but it's not always the case.

I would say that a gaming experience is a game that continuously puts you in complete awe. Not just a cut scene,  or a game mechanic, but a game that overall has made an impression on you. Enslaved, Alan Wake, Flower, Bayonetta, Red Dead Redemption, Mass Effect (1&2) had that type of effect for me. But I will never replay these games again. I was satisfied with the experience and have no incentives to replay those moments.

If we were to put this in movie terms, these games would be the equivalent of highly rated dramas like The Piano, There will be Blood, or Black Swan. They are great, but seeing them once was enough. It would be rare to catch anyone watching The Pianist 30 times within the course of a year. Are these movies a great experience to most people? Yes. Do they have a high replay factor? No. For replay ability, there is not much to say. Think of games that you can play over and over without getting tired of it. Super Mario, Call of Duty, Left 4 Dead, Tetris, Minecraft. They provide endless play time, but the experience is different. Where in the other games there was a finite end with a beginning and end, these game play centric games rely on the endless journey. The journey is the experience and there will never be a definitive end point.

When it comes to music related games, I often think of the two experiences blended together, that it's possible to have both. The repetition of sound and music makes one try to play a game over and over to hear certain sounds again, just like they would when they put repeat on their music devices. The replay ability of music combined with a story can create an incentive to play the game again and again. You could say that if it is this way, then isn't music a form of game play and falls strictly under the replay ability category? Where is the awe, the unique experience? I would argue that the awe comes from music games where the music is dynamic. If you have a game where the music used for game play is not pre-determined, then every time you play it is a new experience, an experience that can special and unique in every game session. Many of the musical games often have a unique and complimentary visual style, so there is an overload of visual and audial information constantly streaming to the player. In non music games, it's mostly the visual aspects that the player focuses with.

So as I pick up Child of Eden later today my question is what type of experience will this fall under? From reading impressions, the game is only an hour long. Will it have the replay ability to make it worth the money or will the hour of game play be so amazingly striking that it will pay for itself in just that span of time?

So today is Minecraft night in our server. Once a week we all make an effort to log in at the same time. Most of the time we are all on at random times of the night. Click on any of the pictures for a larger image. You see that huge castle? that's my uncle's. He's finally finished it after 2 months. At first it was that horrendous warehouse that you've all come to know. He grew that warehouse into a huge cobblestone square castle that looked just as bad. it was badly designed and monsters kept appearing and killing him from nowhere. He got so fed up that he destroyed that entire castle and started fresh. The castle above is the result of his third try. It's 3 stories, complete with a royal hall (in progress), basement, mine, and living quarters above. It's also a sight to see at night. But the server is not all pretty. There is this lava cobblestone structure that just doesn't fit in with the sandstone theme of the city. It's like a huge ugly lava lamp with a glass cone on top that I think it's like a giant glass juicer. It's 3 floors, but the top 2 floors are empty and serve no function. I mean, there is nothing there! the bottom floor are shops, but you can only do so much to make it look nice. I'm not going to say anything to the player that built it because last time I did he blew up a whole section of the city. We have a really cool pirate ship. it has a captain's quarters, library, and sleeping quarters for the crew. Kari has created a huge mural on the side of a mountain at the request of another player. There is another mural on the side, one that looks like a super mario level: I guess from this post you can gather that if you're going to do something at least take some effort. My uncle took 3 times to get it right. It took a lot of time and effort, but the end result was something that people could really say that he did a great job on. If you build just to build with no direction you'll just get stuff like the lava lamp, without consideration of the buildings around you and no function once it's created. Even if it's something silly (first thing I made on the server months back was a penis fountain..), it's better to go with style and creativity than something with no real identity.