Lord of the Rings Online, one of the most popular and recognizable MMOs out there, is now Free to Play. http://www.lotro.com/betasignup/ 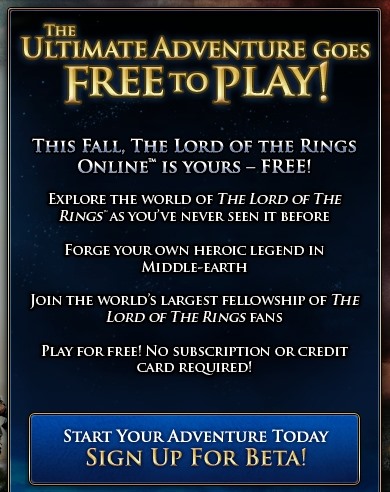 This now joins Dungeons and Dragons Online as the second game by Turbine to go from subscription to Free to Play business model. DaDO was a struggling MMO and as a desperate move they switched to the free to play model, and is now one of the most played MMOs out there. Free to play models make their money from selling items like buffs or pets, and is profitable enough to launch more than two hundred Korean and Chinese MMOs with that pricing structure. Oh, it's also how Farmville and other Facebook games operate, just so you have an idea.

I've actually played this game years back for around six months or so. It's hard to tell from pictures and videos, but once you're inside the game it's visually stunning. They have a great night and day system where locations look completely different depending on the time of day or night. The game is very robust in just about everything. There are literally and endless amount of quests placed everywhere so you can experience a story without grinding. The gameplay is deep with each class having dozens of skills. It has a huge crafting system that's just not for show, I often crafted bows for myself and friends. Most of my gear at some point came from clan mates and not the store.

It has a great housing system. You can buy a house, complete with it's own yard and decorate it. You can look at houses for sale and it varies with the market. When we played we bought a human house by the river, it was a lot of fun. You could also go into other people's houses if you wanted to and look at how they decorated their place. There are clan houses that are just huge, and they have a chest where you can share items.

I highly recommend this game. The reason we left was because I thought the healer class was awful. I'm usually a healer and I hated playing this class in this game. My second character, an archer, was fun to play. Also, at some point, quests can't be done by 2 or 3 people anymore, you need full groups. If you're not in a good guild, good luck with that. I'll sign up for the beta and see if my characters are still there.