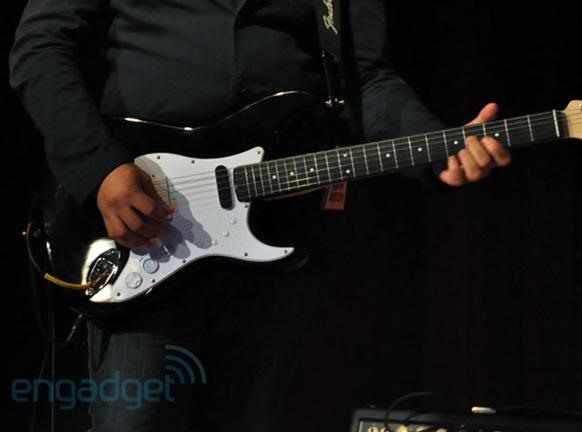 That's a real Strat for the Rock Band game. Rock Band 3 will feature the option of playing on the six button toy guitar like before, or go Pro by using a real Start modified to give input to the game.  You can plug this guitar to an actual amp and play away! Each song comes with a tutorial trainer and the career mode will teach you how to play from novice to expert.

Here is a video showing the guitar in action:

The game's release day and price structure has yet to be announced. No set price for the bundle or the guitar but on interviews they said this information is coming soon. Expect this game to be released this year though, my guess around October or November.

Here is another video with a closer look at the guitar and the keyboard.

It's hard to say which is more impressive in Rock Band 3: They new keyboard or the Strat guitar in Pro Mode. The only place they could go from here is introduce actual music notes and charts and call it insane mode. It's going to be one crazy holiday with Rock Band 3 and Dance Central that's for sure.