Here is the introduction sequence for the game, it's one of the best for this generation: 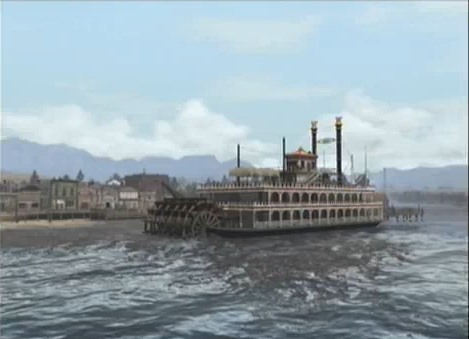 The arrival of the player is mirrored by the arrival of the riverboat, as if the player is getting off the boat to a new location just like the characters. The piano music at the beginning subtly tries to attach the player's emotions into the scene opening sequences. There is a shot of a car being lifted, a quick sign that the times are changing but our hero is still dressed in the past. 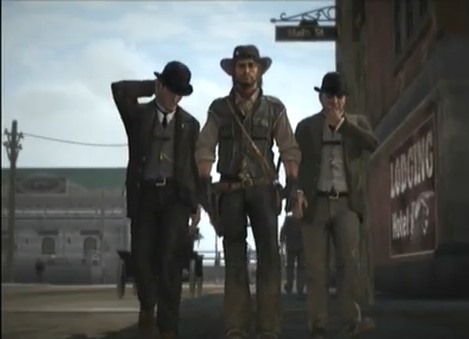 What separates Rockstar from other developers is their attention to nuances. As the main character is escorted from the boat to the train,there is more than just walking strait from one point to another. The characters glance around, walk uniquely and in different lenghts, and interact with each other (when one of the officers taps the John, he reacts negatively). These are things that did not have to be there, but they help set the mood. This might be basic for movies and television, but in games, this attention to detail is rare. In the train ride, every character is animated with little quirks. The lady across John fixes her gloves and pads her dress. Sometimes she looks intently out the window as the train travels. 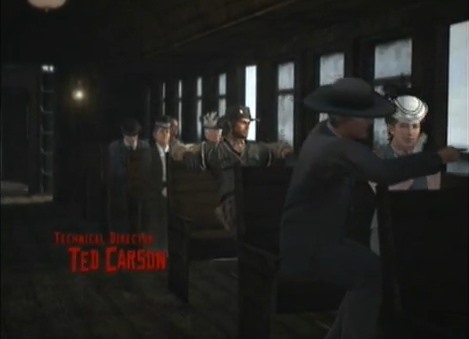 The train ride masterfully switches from three layers of interaction. There are the two older women in the back, talking about the state of the land. In the front, there is a young missionary with a priest talking about religion and change. John in the center, is listening to both sides. He is neither the current state of affairs from which the old ladies belong to, or the new age coming in which the priest and the missionary are conversing about. 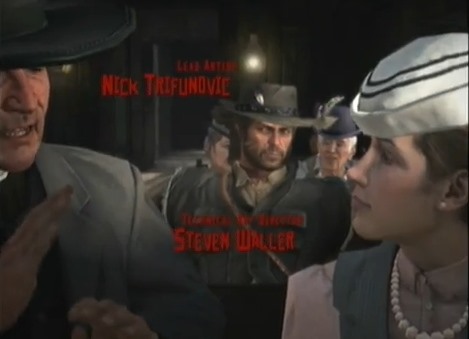 One particular scene here struck me as special. When the missionary(Jenny) asks the priest,

"It's so confusing father. Sometimes, I find it impossible to make a distinction between a loving act and a hateful one. I mean, they often seem to be the same thing. "

You could see John's face listening to the conversation as his eyes move from side to side registering the landscape. As Jenny finishes her last word, there is a faint smile of acknowledgment in John's face, understanding her predicament.

The conversations in the train help give the player a verbal glimpse of the times. Superb voice acting helps bring out what already is a good dialogue. Here is the full transcript of the conversations: 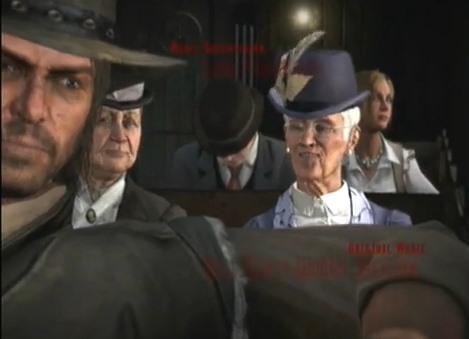 Old woman in blue: Well I for one am grateful Misses Bush, that they are finally bringing civilization to this savage land.
Misses Bush: I could not agree with you more my dear. My daddy settled this land and I know he'll be looking down on us, pleased on how we helped the natives.
Old woman in blue: Yes, they lost their land, but they've gained access to heaven.
Jenny: But father, do you mean, unless an innocent receives communion, they're destined to go to hell? It hardly seems fair.
Father: What I mean to say Jenny, is that there is a great deal of different between an innocent and a savage.
Jenny: I never thought of it that way.
Old woman in blue: Yes they live like animals, but they're happier now.
Jenny: Not only do people now have motorcars father, but I heard that pretty soon, we will be able to fly.
Father: No only angels can fly Jenny.
Jenny: No no, apparently people can fly. Didn't you hear, out in Kansas, a man even got a car to fly!
Father: I hardly think so Jenny.
Misses Bush: Apparently, Mr Johns wants to run for governor, which is why he's so concerned with cleaning up the state.
Old woman in blue: Nate John's..
Misses Bush: Yes.
Old woman in blue: His family is nothing but hill-billy trash that came here after the war. I don't want to be judgmental, but this state should not be ruled by such a disgusting family. A family without class.
Misses Bush: Apparently, the Tom's (Sp) family had made a lot of money and he has a lot of friends in politics.
Old woman in blue: Misses Bush, money isn't everything. There are many things that money cannot buy.
Misses Bush: It seems that money can buy voters though.
Father: What you must remember my dear is that we have been brought here to spread the word. The word and civilization, they are the same thing. They are the gifts, it is the opportunity we have. The chance to live among people who are decent and who do not kill each other. And who let you worship in peace.
Jenny: It's so confusing father. Sometimes, I find it impossible to make a distinction between a loving act and a hateful one. I mean, they often seem to be the same thing.
Father: Yes, Jenny, it is confusing. But you only need to ask me, if you need help.
Jenny: Indeed. 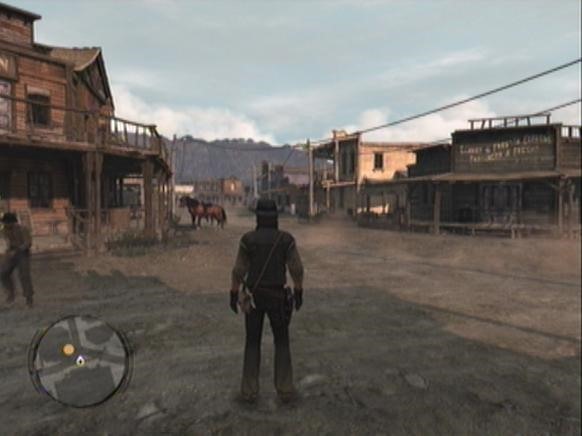 The train stops at a small town. At this point, the player, who is now trusted in an open world, knows enough of the narrative to make sense of the times. Great introduction by Rockstar, hope you guys enjoyed it.

I've changed Jenny's description from nun to missionary. It more aptly describes what she probably is.
I didn't see it before but Bonnie, a main character in the game, in on the train. She is the blond woman with the white shirt and brown vest. She's originally sitting in the back, behind the two older women ( you can see her at 2:21 in the video, or on the 2nd to last screen shot of this post), but at 2:49 and 3:02 , she begins to move to the front. At 4:29 , you can see her sitting at the front. It doesn't mean anything, just interesting after spending so much time at her ranch and watching the introduction again.