Note:
The first half of this review is spoiler free. There are spoiler warnings once you approach the later parts of the review. If you're curious of the game but don't want to be spoiled, just read the first half. For those of you that have finished the game or are curious about the game overall to read final impressions, feel free to read all the way.

The story of Read Dead Redemption is organized by three acts, divided by the people that you help in the act. Under each person there are missions to complete, ranging from simple cattle herding to storming bandit hideouts. So for Act 1 you have
Bonnie MacFarlane: 8 missions
Marshal Johnson: 5 missions
Nigel Dickens: 5 missions
Seth: 3 missions
Irish: 4 missions 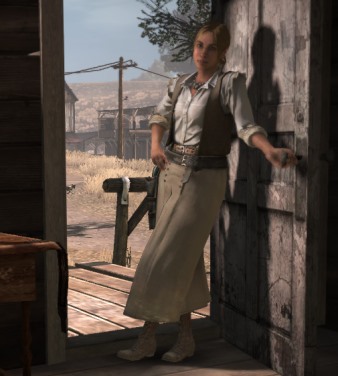 Overall there are 57 missions, and only 10 of them deal directly with the initial story of John Marston's hunt for his former gang. This leaves a lot of filler and creates an uneven pace in the flow of the story. Most of the time you're lead by characters to situations that have very little to nothing to do with the advancement of the story, and it's hard to tell the true purpose of these aimless missions.

One purpose these filler missions could be for player immersion into a setting unfamiliar to today's world. The game uses Bonnie and Marshal's missions to get the player used to the world. Bonnie introduces the player to farm life, herding cattle and taming horses. These are simple missions but important in letting the player ease and familiarize themselves to the game play and western setting. 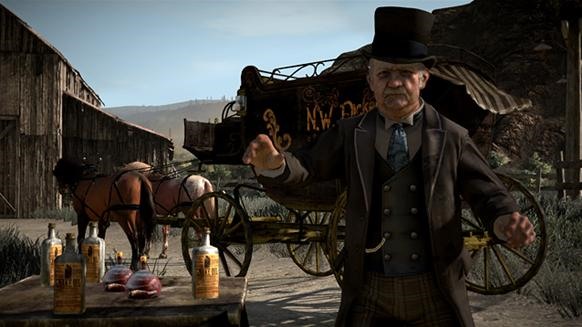 Later missions in the same act do feel more like filler than part of the overall structure. Nigel, Seth, and Irish's missions are more like  unstructured wacky adventures than useful in  progressing the story.  All of their missions were tied to the attack of a fort, but it was so loosely watered down throughout the 12 missions that at time it felts as if one was going around in circles.

Putting the story, game play, and environment together is quite the stale mate. With such a strong ending to the story one can forget just how bad some of those filler missions were, or forgive a sandbox world where your actions did not matter. If the player goes through the game doing the missions only and skipping the challenges and the horrendously boring and badly executed Stranger bonus missions, the game is amazing. One could spend time with the game and finish all the challenges and get all the upgrades and titles, but ultimately these are useless. Only  through the story does the world of Red Dead Redemption shine, making it one of the top games this year.

From this point on, there are spoilers. Please read on if you've finished the game or are just curious about the story with no real intent to play RDR anyways. 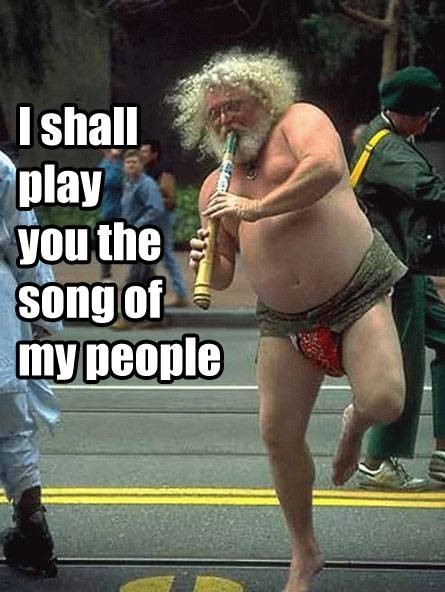 The quality of the characters are inconsistent. The story moves through the characters so the tone changes depending on who the main character is helping. Personally I found Nigel the opportunist salesman irritating, Seth the lunatic fortune hunter semi-interesting, and Irish intolerable to the ear. Most of these were one dimensional characters. Only  Landon Ricketts and Dutch represented characters that were more than stereotypes. 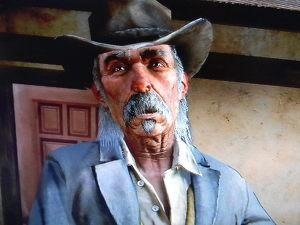 Landon Ricketts is interesting only in the senses that it introduces the player another solution to John's problem. Both Landon and John have a history of killing and violence. Landon's solution was to continue his way of life in a lower scale in Mexico, because the weight of his past will not let him live any differently. John is the opposite. He is trying to change his fate and leave his past behind, but as seeing how the story ends, this was not the right answer. If you compare the way Landon and John chose to lead their lives after giving up their old ways, you'll have two very different ways to have approached John's predicament in the story. John really wants to believe that he will be left alone, but Landon is a better realist in moving south because he knows that the past can't simply be brushed off.

Dutch is probably the strongest character in the game, or at least the most impressionable. The other two former gang members that John chased down, Bill and Escuela, are a waste. For a target being hunted in over forty missions, Bill only appears in two. He comes off as stupid and bullish, and nothing more. Escuela only appears in one mission, making it impossible for the player to build any kind of relationship for or against this character.

Dutch is more fleshed out in the limited missions that the player interacts with him. Here is the first scene where John and Dutch can talk to each other. This scene represents the best and the worst of the game: a trite and comical stereotypical performance of the character Prof Macdougal and Dutch, a character who arrests the viewer with his words and mannerisms every time he is on screen. Dutch is played by Benjamin Byron Davis, and gives off the best voice performances in the game. Notice how his voice breaks or lingers, giving the Dutch character a sense that no matter how eloquent in his words, he has really lost it.

Dutch is interesting because he is a complete contrasts to Landon Ricketts. Dutch chose to stay and keep fighting without adapting his ideas to the changing times of the story. So now there are three paths for characters like John to take. Run away like Landon, keep living in the past like Dutch, or try to live a clean slate like John. Three strong personalities with vastly different paths and each one clinging to their choice with everything they have. In this video there are two sections, the first one showing both John and Dutch's determination to continue their paths in a bank robbery, and the final words of truth from Dutch to John before his death.

Act 3 does what few games do: continue past the main story. With his former outlaw members dead, the game places you in the life of John the farmer. Missions consist of doing chores for his wife and attempts at bonding with his bookworm son. Truthfully these missions are quite boring, but it's understandable that the game is trying to build a bond between the player and John's family so that the final mission can have its biggest impact. Here is the ending for Red Dead, edited to just the cut scenes:

Shocking, that is all I can say (Sorry I was raised on a steady diet of Disney type endings, things like Midnight Cowboy are still shocking to me). John Marston is not the most interesting character in the world, but after spending 40+ hours with him and the last few with his family, feelings were definitely there. This is probably the most heartfelt self sacrificing moment for gaming in recent memory. There are other games that were out last year and this year that also end with the main character dying, but not quite in this fashion.

The son, going from lanky to a rugged young man to continue his story is also unexpected. Having the main character die is a gamble in a sandbox game. Personally I did not want to continue in the world to finish any random quests left open. The story and the game ended with John, and only the multi player is left to explore.

The game is called Red Dead Redemption, but there is no redemption in the game. John is forced to hunt his past, it was not done out of self motivation or atonement. With his family, John chose a clean slate, ignoring the retribution that his past criminal record demanded. If the title refers to a forced redemption of the law black mailing John to kill his past associates, then it is more like Red Dead Coercion. Maybe finding redemption in raising a son in an honest way can be counted as such, but the main character never showed deep remorse over his criminal past, just a desire to move on.