A first hands look at the first chapter of the game.

"When the wife of best-selling writer Alan Wake disappears on their vacation, his serach turns up pages from a thriller he doesn't remember writing. A dark presence stalks the small town of Bright Falls-"

Suspense thrillers are rare. In this current generation, there are only a handful of console games: Silent Hill Homecoming (360, PS3), Siren Blood Curse (PS3), Deadly Premonitions (360, PS3), and arguably, Heavy Rain. This game, with just the first chapter, is better than all of them. 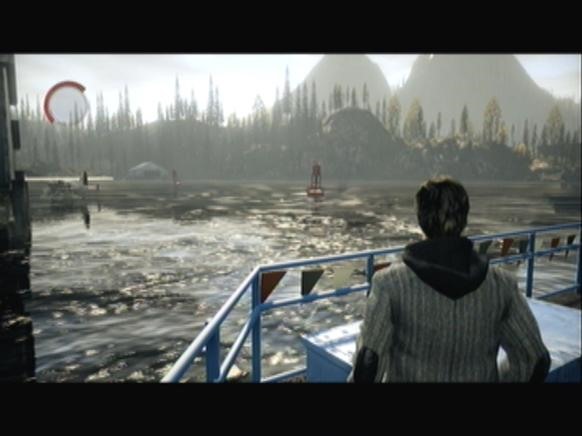 In the daytime scenes, there is a sense of calmness and  serenity. Alan Wake is going to a small town for a quick vacation and there is an intentional feeling that life is slowing down. You start in a slow moving ferry, inching your way to the town. You have time to look around and take in the views of the town and the environment around you.  The next location is the town cafe, where the customers are listless and the place almost empty. Two old guys who talk nonsense and a cop who is just killing time. There is nothing moving particularly exiting, like time is standing still. Arriving at the cabin (your final destination), the mood continues:

If the game is about solving the mystery of a small town to save your wife, the game does a good job of giving you reasons to care. In most games where you rescue loved ones, you never really interact with them, you're just suppose to save them. In Silent Hill 1 for example, the protagonist's daughter is missing from scene 1. Why should we care to rescue her? What bond or memories do we have of this character that would motivate the player to actively take an interest in the rescue of this character? Most games take the short way out and assume the player will care by default.

Heavy Rain and Alan Wake do not follow this path. In Heavy Rain for example, the player gets to spend time with the family of a main character before things fall apart and the character's son is kidnapped. In that game, you want to find and save the son, it's not just another objective to further the story. In Alan Wake, the wife is this type of character. She has a deep fear of the dark, worries about her marriage and her husband's depression. This is portrayed by conversations and scenes carried throughout the first chapter. 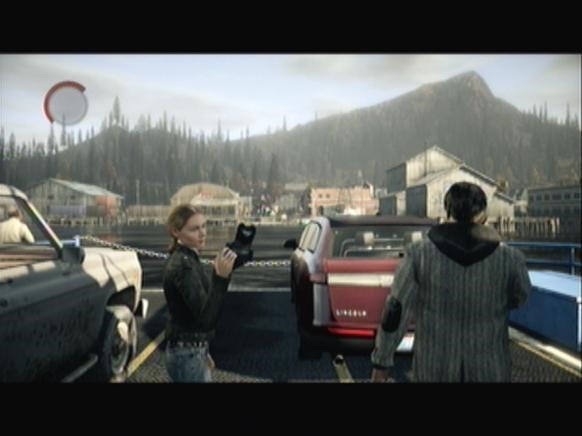 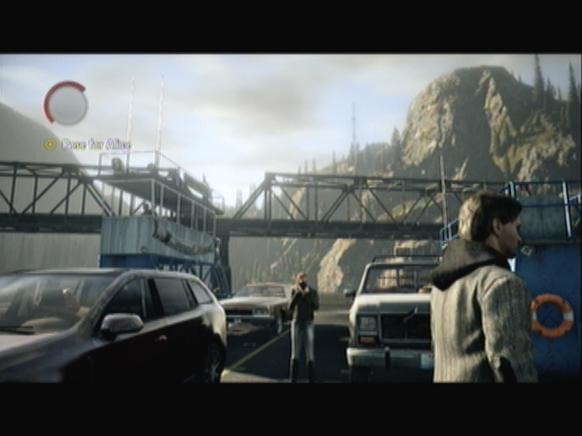 I can't really say enough things about how amazing the atmosphere is. The lighting during the day is phenomenal and at night the mist is amazing. In many games, lighting is uniform, never changing like a continuous cloudy day. In those games, everything from locations to characters are lit evenly without any contrasts, and the shadows are predetermined. Alan Wake's dynamic lighting gives the game a vivid look, with mountains that shine and objects displaying varying degrees of shade.

At night the mist continues to build on the atmosphere of the game. The way the mist moves between the trees and fills in the place between the player and  objects is the best I've seen in any game. I wasn't particularly looking forward to the night sections before playing the game, but now I just walk around just to look at how the mist interacts with the foliage.

The biggest surprise of game is the game play. The game is playable! Controls are responsive, intuitive, and fluid. Heavy Rain is the worst game this generation in terms of game play. Horrible to control, move around, and action scenes consisting of nothing more than quick time events. Silent Hill games are tough to control, clunky is a good word to describe its game play.
Alan Wake combat is smooth. Alan moves where you want him to and the fighting is actually fun. In the game, enemies are surrounded by a veil of darkness, making them look like walking shadows. You need to shine your flashlight at them until you clear the darkness away and then shoot them. Aiming the flashlight is very responsive so it's not hard to do and shooting enemies just as easy. Add to this that enemies appear from behind and not just the front to spice up combat and you have a very fun time dodging, lighting, and shooting everything around you.

The game isn't perfect, there are some qualms about certain issues. In the start of the game, you're trusted into an action dream sequence. This might be a little too much for the start of the game. Starting at the ferry would have been a better choice in my opinion. Conversation dialogues could be better. Some conversations felt stale, better voice acting or character movement within the scene would have been appreciated. The mock "Twilight Zone" five minute tv episode (you can turn on tvs and radios in the game) was too corny to be called satire. If this is the type of humor they are going to have in the game they really missed the mark. GTA 4 did comedic satire correctly with its TV episodes (you can watch tv in GTA too), so there is something to compare it to. There is no saving in the game. The game constantly saves checkpoints and when you replay an episode, you can select three starting points, but not a specific location.

Overall, a very promising beginning for the game. The game is broken into several episodes, like a TV mini-series, complete with recaps of the previous episode. Each episode lasts one to two hrs in what is suppose to be a ten to fifteen hour game.